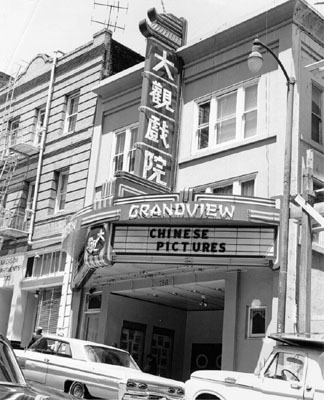 The Grandview operated from the mid-1930’s until the late 1980's
as a Chinese language theatre theatre in the heart of San Francisco’s Chinatown. During the last ten years of its operation,
it was known as the Chinatown Theatre. The building in which it
operated still stands, and the space it formerly occupied has
since been converted into a retail outlet.

The header needs changing to: Function: Retail. aka: Chinatown Theatre.

There are still a few remains of the original decor to be seen inside the building.

This could be the same theater, but the picture definitely pre-dates the 1930s:

The Grandview, was a nice spacious clean theater. We went there several times during the late 70’s, watching most recent American releases with chinese subtitles. It didn’t have a snack bar, but you were allowed to exit, get something, and bring it back in. In the movie “Jade” there is a excellent interior shot of the theatre, as well as a brief chase scene through the Pagoda Palace, while a chinese opera was on stage.

This theater can be seen in the 1972 film “What’s Up, Doc?”. There is a brief shot of the exterior with CHINESE PICTURES on the marquee. It is on the left side of the screen/street at 1:09:10. The band in the parade is playing “La Cucaracha”…

Such drivel. Who cares?

Certainly more relevant to the site than people recalling that they saw such and such at a certain theater just to put their names in print rather than actually contributing something to the actual site.

This story about the Grandview was published in today’s (7-21-17) SF Chronicle. I’ve also posted a couple of the photos accompanying the article.

Upon first glance, the Buddha Exquisite in Chinatown blends in with the neighboring businesses, which are tightly packed in the bustling corridor. A sea-foam green marquee rests atop the store’s entrance with an image of Buddah adorned by rosy lotus buds. The business, located on 756 Jackson St., operates as a paper goods shop. But back in 1940, the Grandview Theater occupied the location and was considered Chinatown’s first modern theater, according to an article by SF Weekly. Today, the only signs of its former heyday are the marquee and a neon-lit sign. The structure’s interior was remodeled, but it once held 400 seats and carpeted floors. The Grandview Theater opened in 1940, when filmmaker Joseph Sunn Jue envisioned a movie theater that catered to Chinese audiences. He presented films shot in Hong Kong but also Cantonese-language films that Jue produced in San Francisco, the San Francisco Chronicle’s G. Allen Johnson wrote. A former nightclub located in an alley off Grant Avenue was converted into a movie studio called the “Grandview Motion Picture Company,” where Jue created his films, the Chronicle wrote on Sept. 21, 1947. Joseph Jue is the only organizer and president of America’s only company that produces Chinese films, and that company is right here.” When he wasn’t busy directing films, he was an usher at the Grandview Theater, the Chronicle wrote on Nov. 25, 1940.
His films covered various genres including detective stories, zany comedies and historic dramas, the Chronicle noted. In 1940, Jue produced about 18 films a year and categorized features as “supers” or “quickies.” The budget and timeframe for these projects depended on the category. “’Supers’ are budgeted at between $40,000 and $60,000 and take from three to six months to produce. ‘Quickies’ cost $15,000 to $20,000 and are rushed out in three weeks,” The Chronicle wrote in 1940. In the same article, the Chronicle said the latest film Jue produced was called, “They Get What They Wanted.” Jue believed the film was “somewhere better than a quickie” but by no means a “super.” Perhaps what made the Grandview Theater successful was that it had a strong hold in the Asian community. First generation Chinese-Americans spoke little English and Chinese movies were among the few diversions available, SF Weekly wrote. In fact, Jue’s films were popular with viewers outside of San Francisco. According to the Chronicle, Jue’s films were a hit in several countries including Cuba, Mexico, Panama, South America, Hawaii, the Philippines, Australia, and Madagascar. In the 1960s popularity for Chinese movie theaters started to fade as some in the community started to prefer American movies.
“Second-generation Chinese-Americans generally stayed away from Chinese movie theaters, going only on occasion and in the company of an older relative,” SF Weekly wrote. Still, that wasn’t enough to sustain the theater and in the mid-1980s, the Grandview Theater finally closed its doors. Eventually, the theater was sold and works produced by Jue were thrown out of the attic where they were stored, erasing the historic record of 20th century San Francisco, the Chronicle’s G. Allen Johnson wrote.