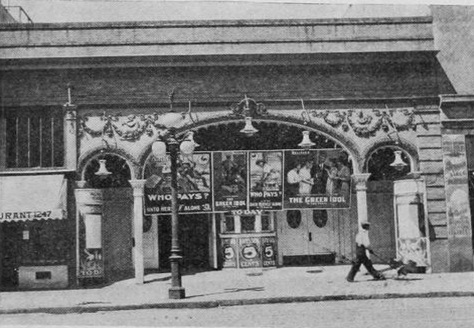 On March 10, 1949, it reopened as the Times Theatre, with a more modern front, but more or less the same familiar policy of bottom price, last run film fodder.

On August 1, 1969 it was taken over by Mike Thomas and Gary Meyer who introduced repertory film programming with daily film changes and a modest printed calendar. Severly handicapped by the notoriously difficult neighborhood parking situation, the theatre closed on December 26, 1976 and was converted into retail stores.

I went to the times regularly in the mid-70s.
If you didn’t mind the sticky floors, no place better to go for a real cinema history education — a different $1. double-feature every day…. where else could you see Polanski’s “Repulsion” and “Elevator Girls in Bondage” on the same bill?

Prior to Gary Meyer co-founding Landmark Cinemas and Mike Thomas operating the Strand Theater and co-founding Strand Releasing, they ran some incredible double-bills at the Times. As I remember it was $1 a show and had the misfortune of seats that would occasionally come unhinged and collapse in the middle of a movie. It was always a treat to take the Muni up to Chinatown and do a movie or two at the Times.

If anyone knows where we could find a print 35mm or 16mm Of
“The Cockette’s” ELEVATOR GIRLS IN BONDAGE or TRISHA NIXONS WEDDING please email me! We would love to play them on the big screen!

The DP who lensed the recent Cockettes doc is Marsha Kahm. She’s listed in the SF Reel Directory and would probably have a connection to the group – you might try giving her a call.

The Times restrooms were to the left and right of the screen at the back of the theatre. Each was accessed by a four or five step stairway. I loved the times for the diversity and price but it was always so bizarre to exit the bathroom and face everyone in the auditorium staring at you as you came down the stairs. I really hated it when the times closed. The Times and the Powell were the best bargains in town for reruns and older films.