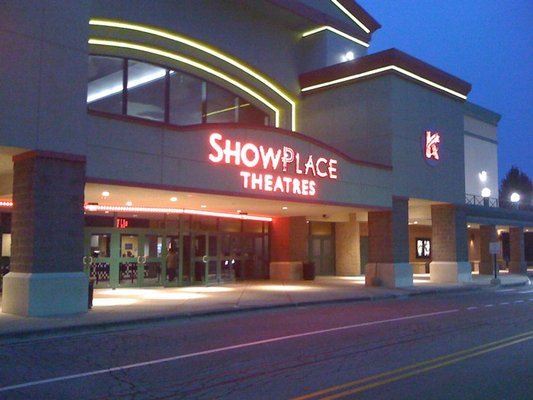 The Crown Village Crossing 18 Theaters opened in May 2001. It is best known for showing independent movies as well as traditional Hollywood movies. It features stadium seating on all 18 screens.

One screen features a DLP (digital light projector) for movies shot using a digital projector. One of the DLP movies included “Star Wars Episode II: Attack of The Clones” (which was shot in digital) and was featured at the Village Crossing 18.

In March 2007, the theater was taken over by the Kerasotes Theatres chain, and is now operated by AMC.

This theatre is horrible. Its always dirty. From what i heard from someone that works there they passed their health inspection by only a couple points. AND they were on the news for one of the worst public basthrooms in the chicagoland area. Plus the picture and sound quality is horrible there. I’m glad they opened the new Muvico theater in Rosemont. They know what movies are all about.

I’m with Ken: I’ve been visiting this theatre for years, and it’s always seemed just fine. Some recent pics are here:

AMC Theatres has taken over this theater since May 25, 2010.

The Village Crossing 18 was designed for Crown Cinemas by architect James Thomas Martino.

I forget, were they THX certified when Crown owned them? I think I remember that being one of their selling points…

Is that the same Crown that owns a few theaters in Connecticut?

The “Crown Cinemas Corporation” page linked from the “Previously operated by” field on this page lists the theaters in Connecticut as having been run by the same corporation that had this house, but I believe it is mistaken.

It’s often difficult to track the various companies that have owned and operated theaters, but I don’t believe that the Crown Cinemas that opened this house in the early 2000s was related to the Crown Theaters, based in Norwalk, Connecticut, which was operating theaters in that state at least as far back as the 1990s.

I’ve also been unable to discover if the Crown Cinemas that opened this theater was a successor firm to the Crown Cinema Corporation that was operating theaters in Missouri, Kansas and Ohio in the 1990s. That company was controlled by Richard Durwood, younger brother of Stan Durwood, then chairman of AMC.

According to this 1996 article) the company that owned some of the theaters Crown Cinema Management was operating (and in which Crown Cinema Corporation was a partner) was forced into bankruptcy. Crown Cinema Corporation was then sold to a Dallas-based theater company called Hollywood Theaters Inc. I don’t know if the name continued to be used after that or not. It’s possible that the company that opened this house in Skokie in 2001 had just picked up the dead company’s name.

It’s all very confusing, except for the fact that I can find no connection between Crown Theaters of Norwalk and Richard Durwood’s Crown Cinemas Corporation of Missouri, nor any connection between the Norwalk company and this theater in Skokie. Theater companies really ought to exercise more originality when choosing their names.

Okay, I’ve found the connection (I didn’t look long enough before.) This house was indeed opened by Crown Theatres, LLC, based in South Norwalk, Connecticut. Here is their Bloomberg data page.

Crown Cinema Corporation, as I noted in my earlier comment, was a different company, based in Missouri and headed by Richard Durwood. It was absorbed by Dallas-based Hollywood Theaters in 1996.