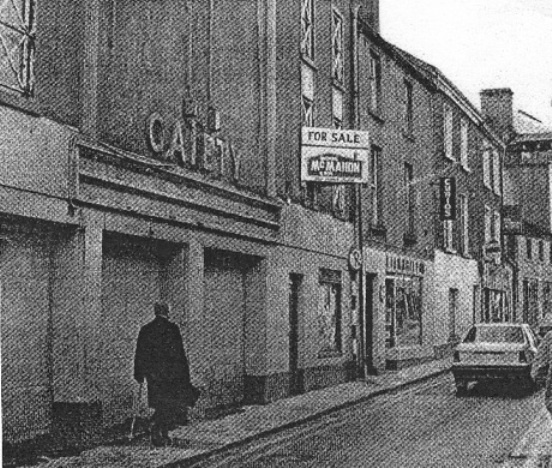 Located in on O'Connell Street (now known as Friar’s Walk) Ennis, County Clare. The Gaiety Cinema was opened on 14th February 1936 with “Roberta”. It was closed on 7th May 1976 with “Harry & Tonto”. It was later demolished and today the entrance to Dunnes Stores stands on the site.

The Gaiety in O'Connell Street opened Friday 14 February 1936, the enterprise of a Donald McGregor along with Miss Mary Boland who was also the manageress. They previously ran the Rink Cinema in the town. It was designed by E.T. Aiken from Dowling & Aiken and had a balcony, with a terrazzo floor in the foyer. The decorative work was carried out by Patrick McGrath, and the 850-seat auditorium had a Philips Wide Range Sound System installed. The first film to be screened was “Roberta” with “The Mills of the Gods” following on the Sunday. The cinema closed on 7 May 1976 with “Harry and Tonto”. After a period of dereliction it was demolished and the site is now the entrance to Dunnes stores. Films were also screened at the Town Hall until about 1950 when it was damaged by fire.