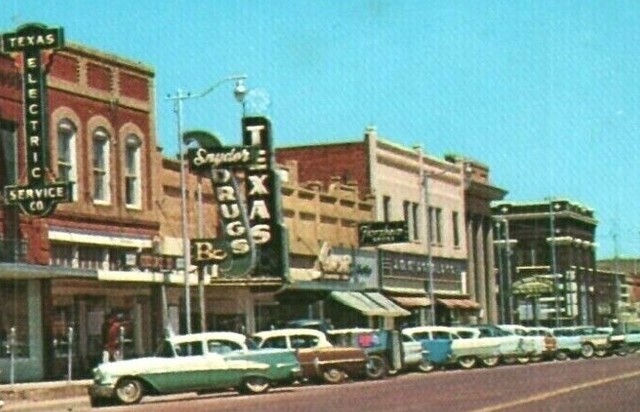 According to the Snyder Daily News, T.L. Lollar built the Texas Theatre in 1934. It first appeared in Film Daily Year Book 1938 with 500 seats.

The Daily News reported on May 13, 1953, that the Texas Theatre was switching to a Friday thru Sunday schedule. Not the only theater to be impacted by television, the Aztec Theatre had closed in March 1952 and the Palace Theatre was eliminating weekday matinees. The Ritz Theatre would remain on a full schedule.

In April 1954 it was reported that all five Snyder theaters were back in the hands of the Lollar family. The Lollars were the owners and former operators of the theatres, which had been taken over by Snyder Theatres, Inc. in 1951. While on a Friday-Saturday schedule, the Texas Theatre finally closed June 16, 1956.

Ironically, the Texas Theatre may have later gotten its Karmic revenge against television. On August 21, 1958, while being converted to offices for Snyder Community Antenna Television, the former Texas Theatre was destroyed by fire. A modern building, which remains today, was later erected on the site.