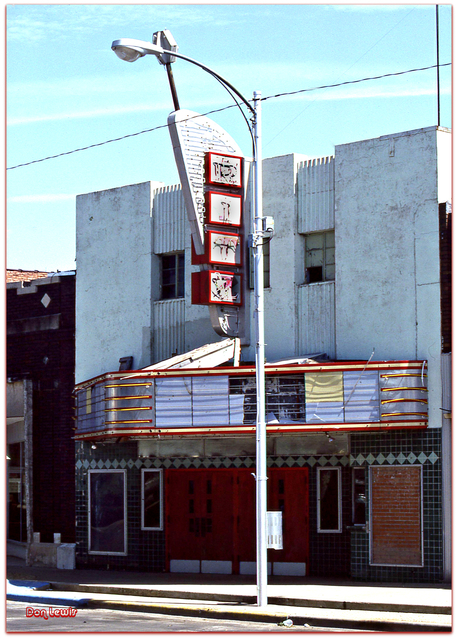 Opened as the Cozy Theater by 1917. It has been recently restored, but the vertical portion of the marquee has lit plastic panels instead of neon. This appears to have been done during the 1960’s. The marquee is very odd looking. Both vertical and horizontal portions are polished metal, with very minimal red striping. The vertical portion leans away from the building and features a pole with a large neon trimmed mace on top. Building itself is a quite basic light green concrete structure with dark green tile at street level.

I wonder how many one-sheets were tossed in trash by the clean up crew.Hopefully, they were smart enough not toss them in the trash.

I know my memory is not gailing but there was another downtown theater that burned sometime I think in the late 1970’s I was born in snyder and used to go back and visit.

The streamline modern facade of the Ritz Theatre probably dates from a 1949 remodeling designed by Sweetwater, Texas, architect Don W. Smith, which was listed in the 1950 edition of Theatre Catalog. Smith also designed a theater called the Joy, at Roscoe, Texas, in 1947.

We (the Ritz Theater Board) are currently having the electrical system on our sign redone. The last upgrade was in 1992.

Robhanhouston—-The Palace and The Texas both burned—-not sure of the dates.

An advertisement for the Cozy Theatre in the May 10, 1918, issue of The Snyder Signal announced that the house would open that day with the five-reel feature The Avenging Trail, featuring Harold Lockwood.

The Cozy was equipped to present stage productions as well as movies. The December 17, 1920, issue of the Signal said that the Hurton Players had been presenting “…some high class shows….” all week, and would be moving on to Colorado following their final performance at the Cozy on Saturday night.

The December 16, 1921, issue of the Signal noted that T. L. Lollar had purchased the Cozy that week and had moved his family to Snyder. The sale was also noted in the January 6, 1922, issue of The Film Daily. Lollar went on to operate several other theaters in Snyder. The web site of The Ritz Community Theater also notes that Lollar bought the Ritz “…around 1921 when it was known as the Cozy Theater.”

Was this Theatre ever named the “Kozy Theatre”? I have an old movie poster for “Kozy Theatre” and it has Chero-Cola on it, I found it at an old antique store in PA thought it was neat. But everything is listed as “Cozy or Cosy Theatre”.