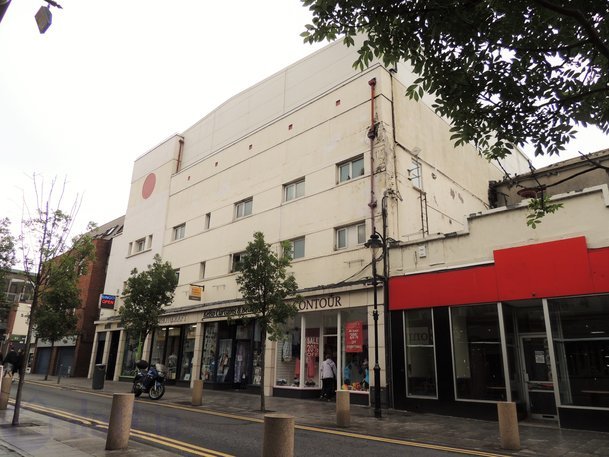 The Bray Cineplex opened as the Royal Cinema on 26th December 1935 and was built in the grounds of the Royal Hotel. The four-storey 1,058-seater was designed by Vincent Kelly (1895-1975) and erected by McNally & Co. By 1948 it was operated by Odeon (Ireland) Ltd. It closed about 1974, when it had 650 seats and was operated by the Rank Organisation. It was subsequently acquired by Michael Collins who continued to run it for the remainder of its life. In the 1990’s it was renamed Bray Cineplex and with 7-screens and 900-seats, it was closed on 28th June 2007. It had been the last remaining cinema operating in County Wicklow.

On 4th July 2008 the roof of the building was damaged by fire but swift action to tackle the blaze meant damage was minimal. The following year later it resurfaced as the Royal Bingo hall which lasted until 2014. The building is up for sale with the only occupants a series of retail outlets along the frontage. A return to films is unlikely in view of the fact that a new development including a cinema has recently been approved for the Florentine Centre site by the local authority. The only venue in the town currently screening films on a regular basis is the Mermaid Arts Centre.

The Cineplex is shown as having 7 screens and 900 seats in a compilation of Irish cinemas in 2001.