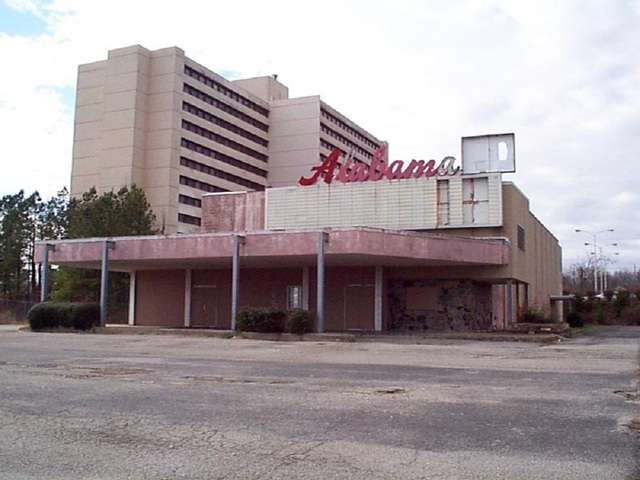 The Alabama Theatre at the Alabama Mall opened on Friday, January 21, 1966. The first movie shown was “My Fair Lady”.

The theatre featured all purpose projection equipment and a Vista Vue screen. The decorations were tangerine and gold colored and the seating consisted of Griggs push-back seats.

The theatre was later twinned in 1981, and free orchids were given to the first 25 ladies that showed up that night, and cigars were given to men while supplies lasted.

The theatre’s last day of operation as an ordinary theatre was July 25, 1985.

The theatre reopened on January 29, 1986 as the Alabama Pitcher Show where movies were shown and beer, wine and food were sold. March 8, 1988 was the last night of business in this format. On March 9, 1988, a “closed for remodeling” notice was placed in the paper, but it never reopened. It was later demolished.

According to Deadmalls.com, the theater was at the corner of University (US 72) and Memorial Pkwy (US 231/431). The theater was torn down with the majority of the mall complex in 1998.

The area the theater used to reside in is now a parking lot for the home Depot built at the center of the old mall site.

The Home Depot, which now sits upon the site where the Alabama was, is located at 1035 Memorial Parkway, Huntsville, AL, 35801.

I have been in hundreds of theaters and this is the only one I have ever seen with a Vista Vue screen. Didn’t even know that is what it was called. How common were they?

Bryan Mercer and Randy Gaylord were awarded a BOXOFFICE Showmanship award for the work they did on “THE WILD McCULLOCHS”.

Martin Theatres opened the Alabama shortly after I came to work in Huntsville in 1966. A shopping center, strangely called just “The Mall” was located at the intersection of University and Parkway. The theatre was behind the mall, on Country Club Drive. The Vista Vue screen masking was fixed, so the ends were cut of off Cinemascope projections. After several years, Martin did a down-the-middle twinning, which was disasterous. It was like watching a movie in a six-lane bowling alley. The Martin in Albertville, AL also had a Vista Vue screen.