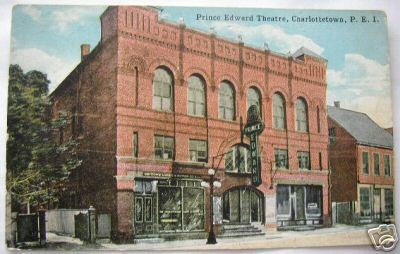 The original Prince Edward Theatre building was built in the 1890’s on Grafton Street in downtown Charlottetown as a Masonic Temple which doubled as live theatre space. Famous Players acquired the building and converted it into a single-screen movie house in around 1935, with seating for 1,050.

The Prince Edward Theatre was destroyed by fire on December 13, 1955. In 1973, Famous Players opened the twin-screen Prince Edward Cinemas on the former theatre site.

According to this web page there are three photos of the Masonic Temple Opera House in the Public Archives and Records Office of Prince Edward Island, but they do not appear to be available online.

The page says the cornerstone was laid on 24 May, 1892. The page also says the theater was built in 1891. I’m not familiar with the custom of laying a cornerstone after a building has been built, but perhaps that is the way it’s done in Canada, or perhaps Canadian web sites are as inclined to be mistaken as American web sites are.

The page also says that the architects were Phillips and Chappell, of Charlottetown. Lemuel J. Phillips and Charles Benjamin Chappell were in partnership as Phillips & Chappell from 1890 to 1895, though Chappell had worked in Phillips’s office since 1884. After the firm was dissolved Phillips appears to have left the profession, while Chappell went on to become Charlottetown’s most prolific architect until his death in 1931. It is likely that he was the lead architect for the Opera House.

I’ve been unable to find any exterior photos of the Prince Edward Theatre, but this interior photo dates from 1894.