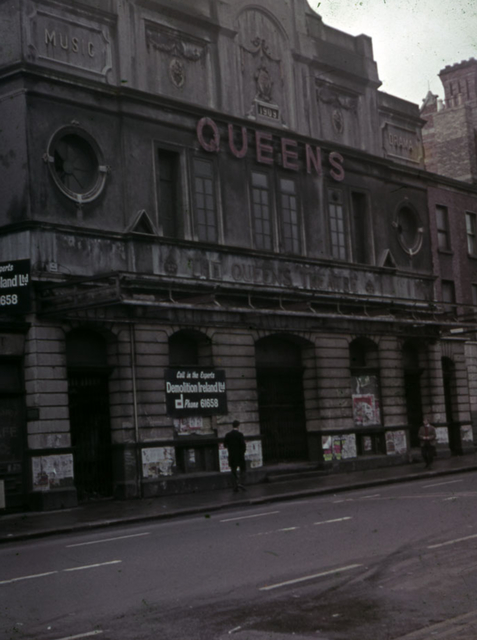 The Adelphi Theatre was opened in 1829 and was demolished in 1844. The Queen’s Royal Theatre was built on the site, opening in October 1844. Seating was provided in orchestra stalls, dress circle, balcony and boxes. It soon became known as the Queen’s Theatre. It was reconstructed in 1907-1909 to the plans of architect R.J. Stirling, reopening in 1909 with “The Story of the Kelly Gang”. By 1934 it was operated by Dublin Kine Theatres Ltd. presenting cine-variety. It had been equipped with a Western Electric(WE) sound system. The proscenium was 28ft wide and the stage 36ft deep. There were 12 dressing rooms. By 1948 it had been taken over by Odeon (Ireland) Ltd. and was still presenting cine-variety.

In 1951 it was taken over as a playhouse for the Abbey Theatre Company after their Abbey Theatre had been destroyed by fire. They stayed at the Queen’s Theatre until 1966. The Queen’s Theatre was closed by the Rank Organisation in 1969 and was demolished in April 1969. An office building named Pearse House was built on the site.