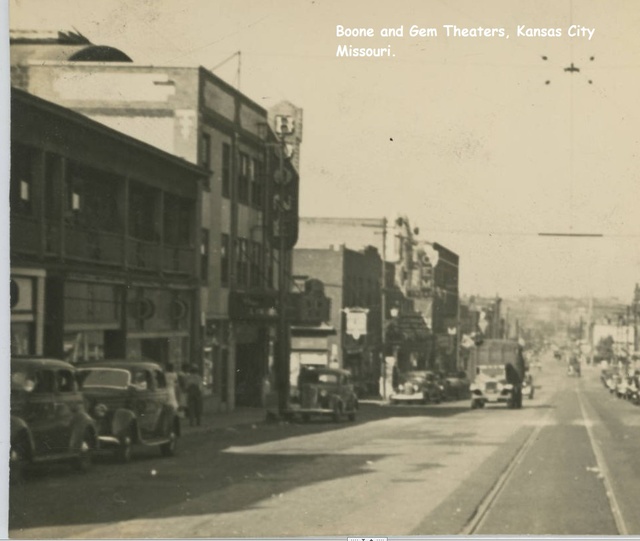 Opened in 1924 as the New Rialto Theatre, this house joined the Gem Theatre, Lincoln Theatre and Eblon Theatre, as part of the popular African American commercial and entertainment district on Kansas City’s east side. It was built on the site of the outdoor Highland Garden Theatre, which had billed itself as “Kansas City’s finest outdoor theatre for colored people.” The New Rialto presented vaudeville, movies, and concerts by the jazz bands for which Kansas City was becoming known.

In 1929 the house was briefly known as the New State Theatre before bing named the Boone Theatre in memory of John W. “Blind” Boone, a Kansas City pianist and ragtime composer who had died in 1927. The neighborhood and its theatres continued to thrive through the 1930’s, along with Kansas City as a whole, which suffered less from the depression than most of the nation.

In the early-1940’s, the house was converted into a theatre-bar-restaurant called the Scott Theatre, which featured mostly live performances but also continued to show movies on occasion. But the neighborhood suffered some decline after the war years, and in the early-1950’s the building was converted into an armory serving as the home of the all-black 242nd Engineering Battalion. When Missouri’s National Guard was integrated in 1960, the unit was disbanded and the theatre came under municipal ownership, and was soon converted into a storage facility for the Kansas City Department of Public Works.

In 1970 the city sold the theatre to the Mutual Musicians Foundation, who hoped to convert it into a jazz and cultural center. The venture failed for lack of funding, and the building languished until the 2010’s, when structural stabilization was carried out in preparation for a planned rehabilitation and reopening of the Boone Theatre as part of the ongoing 18th and Vine Jazz District project.

Here is a photo of 18th Street with the Boone Theatre at the left and the Gem Theatre in the next block.

The New Rialto was designed by architect H. Alexander Drake.