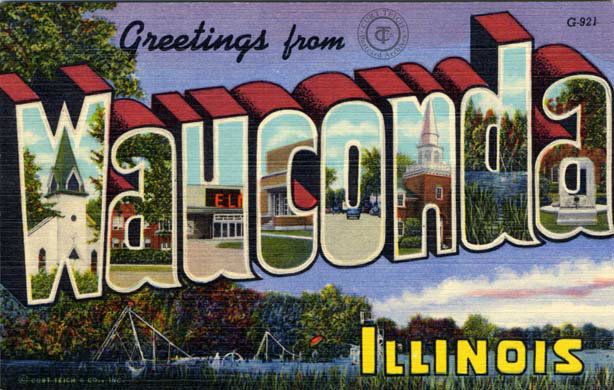 The Elm Theater was opened in 1950. In 1967 it was purchased by the Roman Catholic Church, who continued to operated it into the 1970’s. As a kid, it was a great place to go on a Saturday! It was torn down in 1984 and there is a Catholic church on the site.

I am 90% sure that an Elm Theater existed in the ‘60s in either Elmwood Park or Franklin Park, Illinois. Wish I had more info…

Yes, there was an Elm theater in Elmwood Park. It was located on the north side of Grand Avenue near the Milwaukee Road RR tracks. It was converted to an Armenettis Liquor store in the late 50’s I believe.

Here is a news clipping of the destruction of the Elm.

When did it come down? Judging by that large American car in the clipping, I am guessing 70’s?

The ELM Theater was located at Liberty (Route 176) and Mill Streets in Wauconda. There was parking for 125 cars. The ELM was featured in a large-letter Curt Teich postcard featuring Wauconda landmarks within the letter “U”. Through the 1960s, the ELM’s program listings appeared in the Daily Herald.

And then in 1967, the historic Transfiguration Roman Catholic Church purchased the ELM, reportedly because they feared “purchase by others would hinder the expansion program of the church.” The church members at first volunteered as staff ushers and cashiers before leasing the ELM to a Leonard Deasey, whose children and friends staffed the theatre. The church’s control mandated that only National Legion of Decency-approved films were screened at the ELM.

The ELM Theatre was demolished in 1984. Church spokesmen offered the explanation that it “could no longer subsidize it,” and soon built a new church was built on the site where the ELM Theatre had been.

Recently, an original sign from the Elm Theater was donated by Glen Halverson to the Lake County Discovery Museum nearby.

Leonard J. Deasey of Wauconda was born Feb. 25, 1927, in Chicago. Burial was in Transfiguration Cemetery, Wauconda. He died Thursday, Dec. 2, 1993 at Winchester House Nursing Home, Libertyville. Mr. Deasey retired from the Wauconda Post Office after 36 years of service. He was a Navy veteran of World War II. He was a member of American Legion Post #911, Wauconda. He was Past Grand Knight and member of Knights of Columbus Queen of Angels Council, past president and member of the Wauconda Chamber of Commerce, the Wauconda Lions Club, and member of Transfiguration Church, Wauconda. He managed the Elm Theater for 15 years. He was the husband of Estelle (nee Lauletta); father of Victoria (Vern) Paddock of Gurnee, IL, Kathi of Libertyville, Toni (Jack) Kappel of Palatine, Elizabeth (Dominic) Blasco of Wauconda, and Stephen (Julie) of Island Lake, IL.; brother of Patrick “Jim” (the late Trudy) of Davis, IL. and Marge Selin of Palatine, and grandfather of nine. Visitation was from 3 to 9 p.m. Sunday, Dec. 5, 1993 at the funeral home. For information (708) 526-2115.

(March 3, 1950) Frank N. Consago, 61, of 1257 N. Mason avenue, Chicago, owner of the new Elm theatre now being erected and scheduled to open in Wauconda early in March was killed in an auto-truck collision on U. S. highway 66 near the north city limits of Pontiac, in Livingston county. Also killed in the crash was Mrs. Isabelle Rizza, 36, of Chicago, who was riding with Mr. Consago.

I was never in the theater but lived in the area in the 1960s and would call their message line each week for a laugh. In a super-enthusiastic voice, we would hear something like “Here’s a comedy which will have you rolling in the aisle.” What WAS funny is that the film had been panned by every critic.