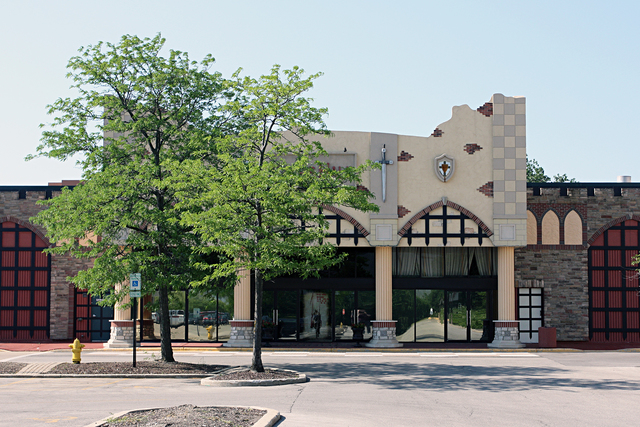 This short-lived theater opened in 1993 with six screens. It was a second-run venue. In its last two years of being open, it was showing first-run features, but that didn’t stop the theater from closing. The theater kept losing money because of the location it was in.

This theater was located in the Northgate Shopping Center just down the street from the defunct Villa Park Cinema. In January 2000, the theater was closed, and two years later, was converted into a nightclub, which itself only lasted a couple of years. It later became a banquet hall, and currently is home to the Brauerhouse, a live music venue and restaurant.

Does anybody know why this theatre closed? It seems like it was successful. What a waste of an almost-new building (though not as wasteful as the huge Loews 20 North Versailles, which closed after only one year).

Also, was this theatre part of a chain, or was it independent?

Saw a few movies at the Northgate, “The Client”, “Timecop”, “Tomorrow Never Dies”, etc. The admission was $1.00 before 6pm, $1.50 after 6pm. In 1999 it briefly had shown first-run movies before going back to second-run before it closed. The Northgate had very good business. Every time I went it was always crowded. It was part of the Value Theaters chain.

I’ve always felt this place killed itself with the attempt to go first-run.

I remember it always being crowded during its initial phase as a second-run theatre, but it went completely DEAD when they attempted to go first-run (although I did see a few films there during that time and their presentation was very nice – good projectionists), and then it was still pretty empty when they attempted to ‘recover’ and go back to second-run (even lowering the prices to $1.00, all shows, every day).

I could be wrong, but it seems like they had a good thing and then ruined it by trying to change things and were never able to bounce back. A shame – it was a nice place.

This place was apparantly very similar to the Harlem Corners Cinema. Same architect? Both were operated by Value Theatres.

Anything happening with this place?

i loved this theater!! I could actually see movies without breaking my piggy bank. I didn’t care that it was second-run movies. I had a wonderful time, and was sorry to see it go.

I agree with ‘malicedoom’ that the first run change up was a bad move.

According to the Brauerhouse website,
“Horror, hot rod, classic and killer B-movies” are shown on Sunday nights.

The Northgate Theatres launched as a six-screen sub-run discount venue on July 30, 1993. Hoping for better things, the Northgate changed its policy to first-run showings beginning on July 9, 1999. The theatre was not able to gain traction and made a brief return to sub-run discount runs just prior to ending operations on January 30, 2000.