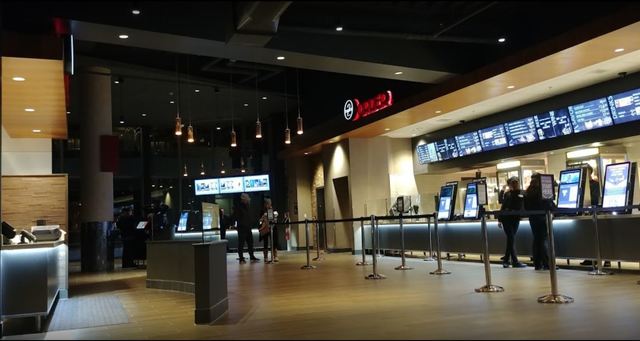 This theater, which is owned by Kerasotes Theatres opened on February 8, 2018. 855 luxury heated recliners. Adults only during the evening screenings. It was closed on March 16, 2020 due to the Covid-19 pandemic. It briefly reopened in summer of 2020 only to close again. On March 15, 2021 it was announced that the closure would be permanent.

This new cinema is located in a new area right next to downtown which formerly was filled with wharves, freight sheds, extensive rail freight yards, some commercial buildings. Now there are condos, apartments, convention center, court house, hotels, restaurants. It’s a promising place to locate a new cinema.

I have attended on three different dates. 1st time was for the Mr Rodgers bio Won’t You Be My Neighbor? At that time an usher would escort you to your seat. Second time was for the Linda Ronstadt bio The Sound of My Voice. Third time I was in The Dolby Atmos cinema for 1917. Normally, I would attend AMC or Showcase Cinemas, but this is why I attended ShowPlace Icon, For the bio films, neither AMC or Showcase was playing film. For 1917, neither AMC or Showcase was presenting in Dolby Atmos. The sound is amazing in Dolby Atmos. Location is easier to get to by public transportation. Parking is expensive. Think it was 25 dollars without validation on a Saturday night. You need to park in a certain garage to get validated parking. Cinema did not offer this when I drove in and they decided to give me two passes for their error once I complained via e-mail.

From boston.com A Boston movie theater has closed its doors for good “While we did everything we could to adjust to the constant challenges of the pandemic, ultimately it was not enough to remain open.” Showplace ICON Theatre in Boston’s Seaport neighborhood. Showplace ICON Theatre in Boston’s Seaport neighborhood. –Barry Chin/Globe Staff SHARE TWEET COMMENTSBy Kevin Slane, Boston.com Staff March 15, 2021 The credits have rolled for the final time at a local movie theater.

The ShowPlace ICON Theatre in Boston’s Seaport neighborhood closed its doors permanently on Monday after more than three years in business at 60 Seaport Blvd.

According to a joint statement from parent company Kerasotes ShowPlace Theatres and building owner WS Development, the economic impact of the coronavirus pandemic was the ultimate deciding factor in the theater closing.

“Due to the economic impact of the pandemic and despite collaborative efforts from both WS Development and Kerasotes ShowPlace Theatres to avoid such, it has been mutually agreed between both parties that Kerasotes ShowPlace Theatre will no longer operate the theatre at The Seaport,” the statement read. “WS Development will be evaluating next steps and timelines for the theatre in the near future.”

First opened in January 2018, ShowPlace ICON gave the Seaport a luxury theater that catered to an older, upscale crowd with adults-only screenings, a full service restaurant and bar, and elevated concessions like gourmet popcorn flavors designed by local chefs.

ShowPlace ICON was one of the theaters that reopened last summer when pandemic restrictions were temporarily loosened in Massachusetts, and the theater played host to in-person screenings for the Boston Film Festival in September 2020.

“It is with a heavy heart that we announced that effective immediately the ShowPlace ICON Theatre at the Seaport is closed permanently,” read a statement from the theater shared by the Fort Pointer Twitter account. “While we did everything we could to adjust to the constant challenges of the pandemic, ultimately it was not enough to remain open.”

ShowPlace ICON isn’t the only theater that has permanently shuttered as a result of the pandemic. In February, the New Hampshire-based Cinemagic theater chain announced it would close all eight of its locations, including its two Massachusetts cinemas in Salisbury and Sturbridge.

Even without the pandemic I think this cinema may had closed.

Any news on if someone will step up and pick this theater up? I’ve only been there once, but it’s a damn nice place, it would be a shame if someone lets it be redeveloped into something else again…