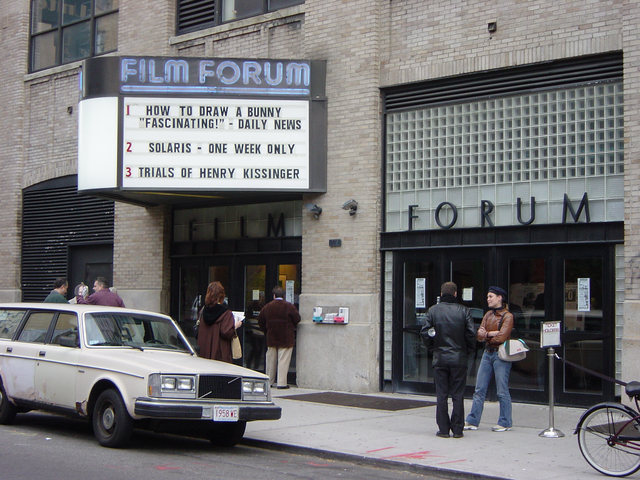 The Film Forum was formed in 1970 and has been at its current location since September 5, 1990.

One of New York City’s BEST theaters. Shows independent and revival films. Has many film festivals. Highlights have included an Ealing film retrospective, Varda retrospective. Looks retro in the front. It was closed for renovation in May 2018, reopening August 1, 2018.

The seats are new BUT…they don’t even recline a little. There’s more leg room, HOWEVER, the site lines are still the same. When someone sits in front of you you are once again rocking your head from side to side. That and as with the old chairs, people are constantly shifting and moving seats when someone sits in front of them. They seem to now show the repertory films in the far #1 theater. I preferred the # 3 as before. With the #1 theater I was there 2 weeks in a row and the same thing happened. The door constantly opening and shutting, even the employees are in and out making an intrusion of themselves. The other day as Mean Streets was coming to a close, an employee opened the door and kept it open as the movie was coming to an end, the light came in, the noise was loud and the patrons (myself included) were quite annoyed. The end of the movie was ruined. I suggest, they cover the opening of the door window so light won’t come in and we won’t see people looking in. Also they should keep the outside door closed that leads from the lobby to the theater, you can hear the loud employees and the sound from the lobby. On a tech note: While the projection seems fine, the sound could be brought up a tad. It has no power. I too have noticed that it seems that most of their rep titles now seem to be DCP. I prefer the 35MM. CONCLUSION: as for the remodel, everything seems to be the same except new seats, more leg room (BTW, the cup holders dig into your thighs, not too roomy) and new theater.

In other words, try to avoid peak times of day, when one might not be able to change their seat.

The film forum has their own youtube channel as well.

She was talking about directing for the first time. The movie opens Friday and will be on Netflix the end of the month. It’s called the Lost Daughter with Olivia Coleman.

Does anyone know what occupied the current location prior to the forum?

It was a garage.