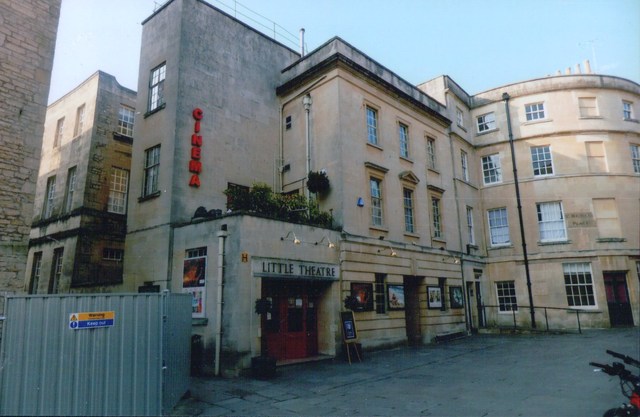 Built by community theatre pioneer Consuelo de Reyes and her husband in 1935, the Little Theatre has remained in the same family since, retaining some of the decorative features of a typical 1930’s cinema while more recently undergoing a discreet conversion into a two-screen arthouse cinema and is now part of the wonderful Picturehouse Cinemas group.

The Little Theatre opened on 10th May 1935 with Consuelo de Reyes play “Vickie”, about Queen Victoria. The Little Theatre had 210 seats in stalls and circle levels. The proscenium was 16 feet wide and the stage 16 feet deep. There were six dressing rooms. From 20th January 1936 it was equipped with a Western Electric(WE) sound system and became a ‘News and Interest Cinema’. The cinema also boasted a tea and coffee lounge for the convenience of its patrons. It went over to playing feature films from 1939. This cosy little gem is situated in a small square off the main street in Bath and has a classical facade of cream stone, standing in front at dusk you can look up through the projection room windows and watch the spools of the projectors spinning round, all the staff seem to have been here forever.

If you have ever seen the classic British comedy film “The Smallest Show on Earth” then you know what to expect here, its cosy and lovely and very old fashioned, except its well maintained, has a great arthouse film programme and since the nearby Robbins Cinema closed it became Bath’s only independent cinema. The nearby ABC Beau Nash has now closed when owners Odeon opened a new six-plex just down the road.

The Little Theatre was originally planned as a dual purpose theatre and newsreel cinema, however the placement of the projectors means the beams may be cut by people standing on the balcony – the main reason the balcony is used mostly for overflow seating for popular events (although with a polite request it may be available for regular screenings too!). The second, smaller screen used to be the flats and scenery store for the stage below – it was converted to a second screen with the dwindling use of the stage for plays (although occasional events still te advantage of the stage in screen 1).

The land beneath the cinema is (as with much of Bath) vaulted catacombs, although there is no convenient access from the cinema as it has been built over (whether by the screen 1 seating or the stage is debated).

Bath’s oldest usher ‘Michael Ball’ had worked in cinemas in Bath for 50 years of his life. ‘The Little’ (as it is locally known) was his last employer, Michael passed away in the same year as the cinema installed a digital HD projector to run alongside the 35mm projector – 2007.

The Little has recently launched a fundraising campaign “Love the Little” for essential building repairs and improvements (better wheelchair access, adding a small bar/social space, etc). The campaign was launched with a showing of vintage British comedy “The Smallest Show On Earth” followed by a Q&A session with stars Virginia McKenna and Leslie Phillips.

In the mid 1960s I did a short relief stint at the nearby Forum. On one of my mornings off I wandered around Bath City and stood outside of the Little Theatre. A gentleman, who I believe may have been Michael Ball, told me about the cinema’s history and gave me a guided tour of the box and building. I was most impressed with the way that I was welcomed. Unfortunately I cannot recall the exact date of my visit but do recall that the cinema was showing “Citizen Kane” that week.

The Little Theatre has been immortalised for eternity in the excellent new Wes Anderson film THE FANTASTIC MR FOX, is a scene in the town when the animals are battling the farmers they run past the beautifully recreated frontage of the Little including the over door signage, the lobby and the big red CINEMA sign up the front.
I was quite speechless when i saw it last night at the opening night of the London Film Festival
http://www.youtube.com/watch?v=wJbY3QrIifE

Some photos of this gorgeous little cinema, taken in August 2016, can be found here:–