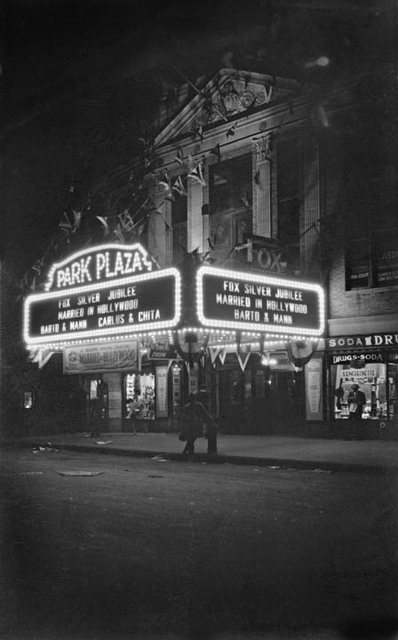 Opened in 1927, the Park Plaza Theatre was located on University Avenue (now known as Dr Martin L. King Jr. Boulevard) in the Bronx. It was next to Public School 82.

In the 1940’s and 1950’s it played double bills of second-run films and was operated by the Skouras Theaters Corp. chain. It was last operated by Brandt Theatre from 1964 until they closed it in 1966.

I just rode by today on my bike. It has been torn down. By the way, Stephen and Warren should get out on their bikes more often!

In August 1964, I went to a Friday evening showing of The Night of the Iguana, at the Park Plaza. I remember joining an extremely long line of people after getting my ticket. At that time, I think only one film was being shown.

I remember the Park Plaza well, it was at the SE corner of Tremont and University Avenues, with the Marquee on University Ave. facing West. It was generally shoddy and dingy in the 1950s when I lived in the area, and not being much of a moviegoer, I only attended films there a few times. It was reputed to be a tough theater for kids to sneak into. To its south was the concrete upper schoolyard of JHS 82, as others have correctly noted. Mike Price

This photograph of the Park Plaza Theatre was taken in 1929 by George Mann of the comedy dance team, Barto and Mann.

Thanks for the photo Brad,and link.

This webpage has a picture of the Park Plaza and information about its Wurlitzer organ. The first film on the marquee was released in 1951.

Click here for an exterior view of the Park Plaza Theatre in 1929.

That was JHS 82. Later became the auditorium for the school. Around the side was a deli which made the only great bologna sandwich in the world. I don’t know how they did it, but they did. It was a nice theater, a cut above the smaller theaters off the Concourse (except for the Loews 167th St. which was a bit grander. It played double features in the 50s.

The map is wrong. It was at the SE corner of University and Tremont.

Listings ended in 1966. It was last operated by Brandt theatres who taken it over from Skouras in 1964.