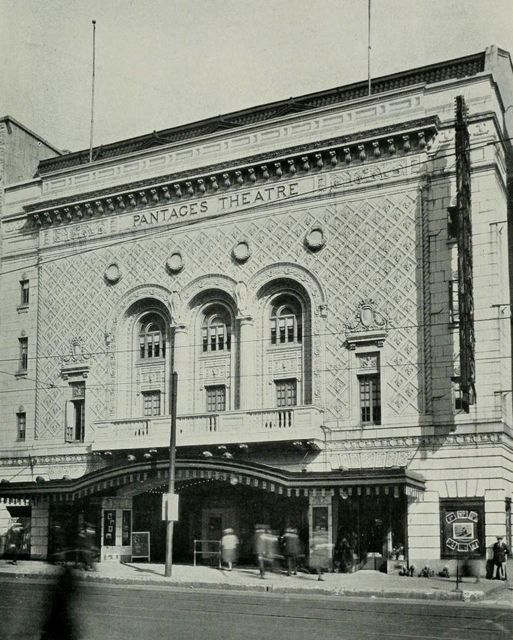 The west coast Pantages vaudeville circuit began plans to build a theatre in Memphis as early as 1916. Construction began in 1919, and the building had to be fitted into an existing lot with two alleys using portions of a 19th century structure still standing. B. Marcus Priteca was the architect, and Pantages Theatre was the most ornate of all movie palaces built in Memphis. The half-block depth left no room for a grand lobby, but a ‘colored balcony’ was constructed with a separate entrance in the south alley. Though Alexander Pantages had hoped to open before Loew’s had completed their two theatres, the Memphis Pantages Theatre opened on April 30, 1921, after Loew’s Palace Theatre had opened in February 1921.

Pantages vaudeville and films provided healthy competition to the Loew’s and Orpheum operations. One of the most notable celebrities to appear in 1926 was Babe Ruth who told stories about his baseball career to packed houses. The Pantages Theatre was equipped with a 3 manual Robert Morton organ, with the chambers installed under the stage. However this may have been a retro-fit installation, as the opening night newspaper articles do not mention an organ at all.

The Pantages Theatre was sold to Warner Brothers in 1929 and remodelled for sound films, becoming the Warner Bros. Theatre on January 31, 1930 with John Barrymoore in “General Crack” plus vaudeville acts. In addition, a glorious marquee was added to one of the most photographed building facades on Main Street. The theatre appeared in hundreds of photographs during its life. It remained a first-run theatre with most of its ornate décor intact, but during its later years few remembered its grand days or took notice of its beauty.

The Warner Theatre was sold in 1968 and the entire corner demolished for a bank office building. It was discovered that the dome ribs were reinforced concrete and the proscenium arch was defined less by draperies than by a huge block of concrete which rose high above the plaster. Demolition was a long and arduous task, and an entry plaza marks the site today.

Contributed by vastor, Will Dunklin
Get Movie Tickets & Showtimes

Joe, you might also remember that the Memphis Loew’s State (q.v.) auditorium had been built into the shell of an existing warehouse.

Joe’s remark would explain a theatre seating 2300 built into a half-block depth lot, backing into the alley. The Pantages had practically no lobby, just a foyer, and a canopy that ran the entire width of the building. That’s why the later marquee was so long. Another alley ran down the south side, perhaps that’s where the negro entrance was. I just missed this one as I was just becoming interested in movie palaces when I saw it coming down. I did see some slides, later, from the bank that bought it. The dome ribs and the proscenium were reinforced concrete—it took forever to bring it down. It also seemed to be the only true concrete proscenium arch (of any size) in a Memphis theatre—the others were either oblong (Loew’s Palace, Lyceum, Majestic) or had an arch with drapery to change the shape of the actual oblong opening (Orpheum, Loew’s State).

Also note, in the Life Magazine photo, the “Loew’s” on the Loew’s State vertical has been covered up because the theatre had been sold and was now called just the State. The sides of the marquee used the vertical for the Loew’s name but the front had a panel which covered the neon reading “State Theatre.”

Joe: where did that beautiful photo of the Pantages come from? It is much better than the one the Theatre Historical Society owns (and I have that print from them). There weren’t any more, were there? BTW, in the THS collection from Terry Helgesen is where the 1916 date came up. Maybe, B Marcus Priteca was given the contract that year and there were construction delays. There also exist beautiful photos of the block with and without the theatre.

The photo of the facade I uploaded was originally part of the biennial exhibit of the Washington State chapter of the AIA, held in Seattle in April, 1922. It was included in a portfolio of photos from the exhibit published in the May, 1922, issue of the San Francisco-based journal The Architect and Engineer. The magazine is in the collection of the San Francisco Public Library, which scanned and uploaded the issue to the Internet Archive.

This was the only photo of the Pantages in the portfolio, though there might have been others in the exhibit itself. The magazine does not credit the source of the photo, but it was most likely provided for the exhibit by the office of the architect, B. Marcus Priteca, who was a member of the Washington chapter of the AIA.

If you’d like a larger version of the scan, go to this link. You can enlarge the scan by clicking on the + icon in the toolbar at the lower right corner of the page. The scan can be made quite large before printing or digital artifacts begin showing up.

The rest of the 1943 photos have been posted. Two more views of the auditorium from Memphis Room of the Memphis Public Library. Used with permission.

Built by Alexander Pantages, his eldest son Rodney was the general manager of the circuit.

When the theater opened on February 28, 1921, Jack Claxton was in charge and J. Lloyd Dearth his assistant. By that summer Jack Quinlan was the manager and then J. Lloyd Dearth. On October 7, 1925 A.B. Morrison became manager for at least two years.

This became the Warner theatre on January 31st, 1930. Both grand opening ads posted.