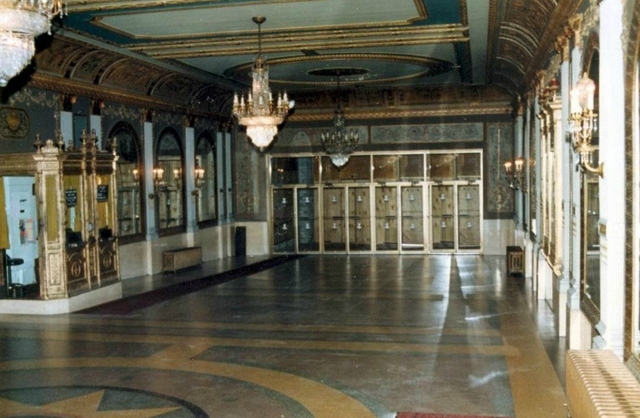 The Bay Shore Theatre was opened on August 12, 1926 with Monte Blue in “So This is Paris” and Roscoe Ails heading vaudeville on the stage. Along with the Regent Theatre, this is one of two closed up theatres along W. Main Street in Bay Shore. By 1941 they were both operated by the Prudential Circuit.

The Bay Shore Theatre was gutted and currently houses a YMCA.

George, are you the George I know from Cabaret?

Marquee and entrance just after closure.

Quite a grand place. I recall seeing “Earthquake” there and looking up as the sensurround shook the theater and noting I was directly under a very large chandelier. This was quite an elegant place. Sad when it was gutted.

Jeff M.: Thanks for posting these photos!

I grew up in West Islip, but did not get to see the inside of this theater before it closed.

(Looking at the photos, I believe I may have played in the nice entrance way around the box office and golden fixtures once for a minute during a stroll through town when the theater was not open, but that’s as close as I got.)

I’d see the marquee as my parents and I would occasionally drive past on our way to McDonalds just east of Bay Shore in Islip, and I’d wonder what the inside was like.

At one point, (in maybe May 1979 according to when Wikipedia says it was released), a movie version of “Battlestar Galactica”, one of my favorite television shows, was playing there, but left before I asked my parents to take me. (I may have been waiting for school to let out for summer, not knowing it wouldn’t still be showing. I also got the impression my parents were mildly reluctant to go there…. something in the tone of my mother’s voice as she mentioned the beautiful chandeliers, like she and my father had some bittersweet memory of the theater from an earlier time when their lives were different, that they didn’t want to relive.)

I assumed there would eventually be another reason for me to visit the theater …. then on one trip through Bay Shore, it was closed. Later I was shocked when it was suddenly a YMCA with the marquee and entrance completely gone.

Decades after, there are personal computers, then something called the internet, then Cinema Treasures… and whoa — suddenly I’m getting to see what the inside looked like when I never thought I would!

I SAW" THE TEN COMMANDMENTS",DEBBY REYNOLDS&TONY CURTIS in" GOOD-BYE CHARLIE",DORIS DAY in A SPY COMEDY"CAPRICE", and “WID-WAY” with CHARLTON HESTON in SENSOR-ROUND THERE.WHEN I HAD SEEN THE THEATER HAD BEEN GUTTED I HAD TO TAKE A LOOK IN SIDE,I SAW EXPOSED SOME OLD DESIGNS ON THE WALLS and AN OLD SINGLE BOX OFFICE BOOTH WRAPPED AND MARKED SAVE.IT WAS SAD.

My late old friend who had been an usher used to travel on the bus between the Bay Shore theater and the Babylon theater to work. He got his brother some work helping emptying out the Bay Shore theater when it was closing down. His brother told me about all the items the theater kept in storage. Some of the contents went as far back as a large cut out display of Shirley Temple. They sold off most of it; the rest was junked. I wish I could have known of the full inventory of the theater’s contents.

Closed in April 1989 by United Artists

rivest, your comment is incorrect. AlthoughUnited Artists took over the Prudential Theatres, at the very end some of them were otherwise affiliated. The Bay Shore, together with the Amityville, Farmingdale, Brookhaven and the Plaza (Patchogue) became Almi-Century Theatres. Subsequently, Almi-Century acquired RKO-Warner with the resulting name being RKO Century Warner. I have several newspaper clippings from that era showing the Bay Shore under that banner playing Chariots of Fire which was a 1981 release.