Boulton Center for the Performing Arts 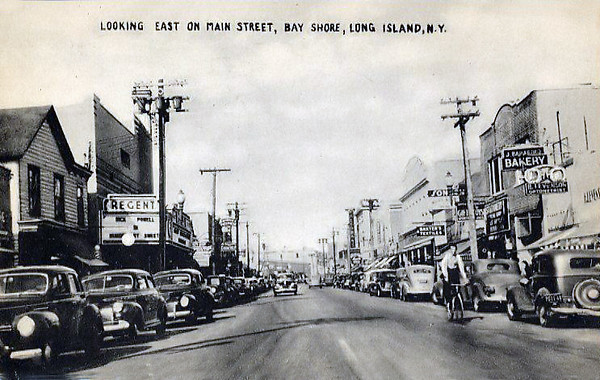 The Regent Theatre was opened prior to 1914. It was first modernized in 1934 by John Eberson when the seating capacity was given as 678. In the 1940’s it was operated by the Prudential Theatres chain.

The new Boulton Center marquee is quite attractive.

One day, my aunt and mother decided to go to the upstairs balcony, which was closed to the public, and watch a movie. They laughed so hard that the punters started to leave. Both of them had identical, loud laughter.

My mother is now deceased (as well as my aunt), but I will always have funny and fond memories of this place.

When I lived in Bellerose the cashier at the local theater was, I believe, a single parent of two sons, and a WWII widow. The doorman was an elderly gentleman. I think that was often the combination at the Century Theatres which always had continuous performances rather than just evening and, perhaps, matinees like most of the Long Island venues.

I remember the doorman being very intimidating looking, but he was lovely and protective of my mother and I. I remember being fascinated with the lovely interior, which contrasted with the type of movies being shown. But, you may be right about the combination of people working there.

I want to add I now live in Europe and have not been back to Long Island for 28 years. I am sure things have changed a lot; especially Main Street, Bay Shore.

alyxzandra have you contributed info on your current theaters to CT?

No. I am not sure what I can contribute.

Are theaters where you are listed on CT? If not, they’re easy to establish. If you’ve been to one or more, look them up on CT and make comments which would be informational.

In the 1980’s the then Regent showed X rated films and shared ads in Newsday with the Ronkonkoma and Rocky Point Art Cinemas.

Uploaded a photo of an ad which appeared in the September 5, 1920 Paramount Week indicating that the, then Regent, would be participating in a special exhibiting event.