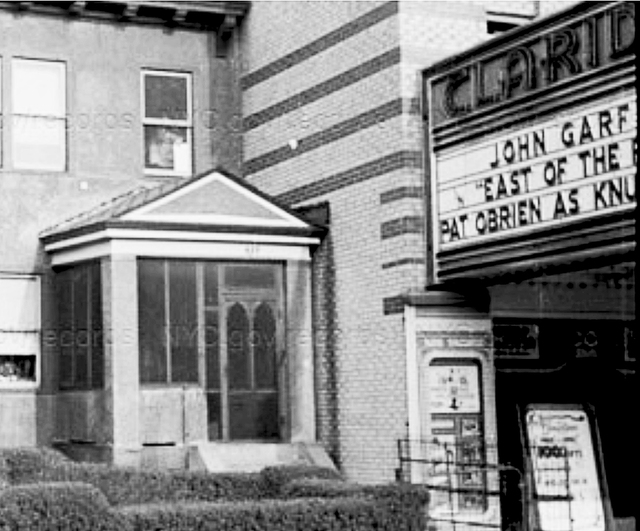 This former theater is located near the Avenue P station of the F Line. The exterior of the building that is still standing has an Art Deco look. The Claridge Theatre opened in September 1933 and ceased showing movies in 1963, when it became a catering hall. At one time it was known as the Claridge Catering Hall and then it became Le Chateau.

The latter closed in the last year or so, and the building stood vacant until recently when a demolition crew started tearing it down. (By the way, this is the third Brooklyn theater building that I have discovered being torn down in the past few weeks. The other two are the partially demolished Carlton Theater and the fully demolished Deluxe Theater.)

This theatre was still open as late as 1959 when “Operation Petticoat” went on the neighborhood run.

I grew up around the corner on East 2nd Street. The Claridge used to occasionally run 50 cartoons at a time on the weekend, with a line of kids down the block waiting to get in. I remember sitting through Old Yeller about five times in one day. Great memories.

I lived in this building in 1987-88. I shared a huge apartment with my cousin and his wife that was built directly over the lobby of the old theater. It was, in fact, the first place I ever lived in NYC. The apartment, which was reputedly built for the theater’s owner, featured an incredible living room that was like a theater itself with a staircase that wrapped around the room in an ascending series of balconies and a dome that rose 30+ feet above the floor. There was beautiful dark oak woodwork everywhere and the master bath had luxury plumbing fixtures straight out of the ‘20’s, including a wrap-around spray shower.

From the master bedroom one could walk right out onto the roof over several offices that fronted on Ave. P (I remember a dentist’s office in there). There was no AC in the apartment and during the hot summer months we would have parties with several folks sleeping out on the roof. I met my ex-wife (we were married for 15 years) on that roof in ‘87. There was also a sealed door in the apartment that apparently led out into the auditorium (which had been stripped of most of whatever detail it once had, and covered with ugly, glitzy junk).

I still remember the sounds of the wedding receptions beating up through the walls and floors at night, and the crowds of joyful people out on Ave. P. So I was really shocked, and a bit saddened to see the old place gone on my last drive out that way. Time marches on I guess…

I was a neighborhood kid (East 7th Street)during WW2. We would go to the Claridge to see movies that we might have missed at the Jewel or to see the 50 Cartoon “Kiddie” shows. Also… it was very cheap. They only charged 6Â¢ for a Saturday matinee while the Jewel was usually 11Â¢. The first 50 kids or so also got a free comic book at Saturday matinees. The Kingsway was really expensive at 20 or 25Â¢!
Karl

I lived in the neighborhood.DAHILL RD & then East 2nd.
In the 1950’s my bother & cousins would always go for the “25” color
cartoons + feature.
In 1961-1963 while a junior at Lafayette HS I worked as an usher.
this was my first real job an earned a whopping 1.00 per hr.
Would go to newstand at McDonald An.& Av.P and wait for the Daily
news for the manager his name was Feldmen I think.
Had some good times.

In 1960 the Claridge advertised itelf as the most beautiful and modern theatre in New York. Quite a statement :)
View link

I remember the Claridge theater quite well. My parents used to take my sister and I there when we kids. I vividly remember seeing “It’s a Mad Mad Mad Mad World there in Cinerama (circa 1962) and "Windjammer” in Cinerama as well. Even though I lived in Newark and was closer to the Stanley, Castle and Sanford movie theaters, I visited the Claridge quite often. It was a great place to see a film back then. Just down the street was Grunnings Ice Cream, which was an awesome place to visit after the movie was over. It closed in the 1980’s I believe.

This is what replaced the building that housed the Claridge

AlinNYC …. I lived in that apartment from 94-99. Amazing place-sad as well to see it gone.