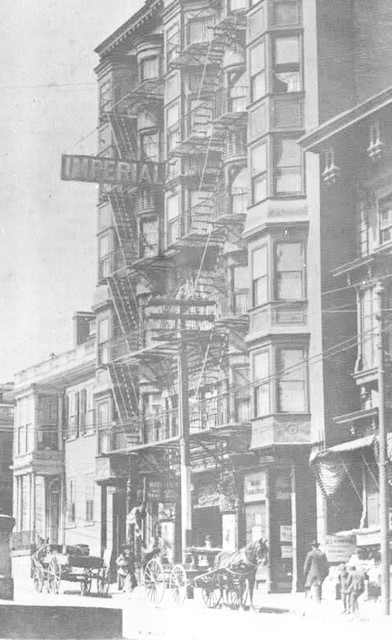 Charles Allen announced construction of this theatre in 1900 with the plan to name it Allen’s Grand Opera House, but he ran out of money and sold the unfinished theatre to James A. Foster. The theatre was a well-designed place, one of the best ever built in the city of Providence. It opened in 1902 as the Imperial Theatre. It was located across the street from the still new Cathedral of Saint’s Peter and Paul, across Cathedral Square at the intersection (then) of Westminster Street and Weybosset Street. It began as a first-class dramatic venue with none other than the Four Cohans appearing opening night. George M. Cohan was from the city of Providence.

With a transitional interior style resembling both a 19th Century opera house and an early-20th Century theatre, it was the only house of its kind built in Providence. It was a three-decker, with an orchestra, balcony, and gallery. The theatre was less impressive from the outside, with its jungle of fire escapes over the Cathedral Square facade.

But the theatre seemed to have a jinx and after its initial promise and creeped into a slow descent. Its location just beyond the perimeter of downtown may have affected its image and potential as well. In succeeding decades the theatre moved into vaudeville and burlesque and then films and underwent many name changes later that included Shubert Theatre, Mayflower Theatre, Colonial Theatre, and ultimately Capitol Theatre or E.M. Loew’s Capitol Theatre. It met pretty much the same fate as did both the Keith’s/Victory/Empire Theatre and the Westminster/Empire/Bijou Theatre a few blocks away, becoming a skid-row theatre, the quintessential “scratch-house” featuring frequent changes of double bills of third-run and old movies at rock-bottom admission prices. It was a delight for chronic film addicts but also a magnet for derelicts escaping the outside world for a place to sleep. Not much was done in the way of upkeep.

The Capitol Theatre was located about half a block up Westminster Street from the Modern/Westminster Playhouse near Empire Street. It was demolished in 1965 to make way for a parking lot in the Weybosset Hill renewal project that eliminated segments of Westminster Street and Weybosset Street and created a plaza in front of the Cathedral and a complex of buildings adjacent to and near it.

In this detail from an early 1960s aerial shot, you can see the Capitol Theatre at the top center. To the far left is Interstate 95, nearing completion through Providence. On the right is the Cathedral of Sts. Peter and Paul, seen from the rear. Note the proximity to the Capitol just across the street, a bit to the left. That square was Cathedral Square, now subsumed by the plaza in front of the Cathedral. The two streets at that point were portions of Westminster and Weybosset which were eliminated. The city street to the right of Rte. 95 and paralleling it is Service Road No. 8. The Capitol is now a parking lot. Facing Service Road No. 8, smack in the path of Westminster Street, is where the Diocese of Providence auditorium is.

This old postcard image shows the theatre in the first decade of the 20th Century when it was called the Imperial. The theatre, on the right, can be seen with all its fire-escape structure. The “Imperial” sign on the left may have been added in the printing of the postcard. It doesn’t look like a billboard. Images of this theatre are extremely rare.

This old postcard image shows the entrance to the Imperial Theatre around the year 1907. The poster on the left is for vaudevillians Baker and Lynn. The shoe-shine parlor on the right charges 5¢ for ladies and gents. The windows above the entrance are for residential apartments, and the start of the theatre’s famous (infamous?) jungle of fire escapes can be seen. This is a rare and remarkable photo of a historic theatre of Providence.

This old postcard image also comes from around 1907. It was mailed in 1909. Notice the signs for the Imperial on the left. The Imperial itself is on the right, decked out in the colors.

A 1926 newspaper article lists the seating capacity of the Capitol as 1400.

The Theatre Historical Society has the MGM Theatre Report for the Capitol; it’s Card # 540. There is an exterior photo taken May 1941. The address is “Westminster”. Condition is Fair. It was over 15 years old, and was not showing MGM films. The seating was given as 2,000 which seems too high.

CAPITOL THEATRE PHOTO, 1941, FROM MGM REPORT Thanks to Theatre Historical Society of America.

In addition to its location outside Providence’s main shopping and theater district, the Capitol had a design issue that probably contributed to the difficulty of operating it as a movie theater. The 1909-1910 Cahn guide describes The Imperial’s seating arrangement as 484 in the orchestra, 388 in the balcony, 40 in boxes, and a whopping 800 in the gallery.

As the stage, though 40 feet deep from footlights to back wall, was only 65 feet between side walls, the whole theater must have been fairly narrow, but the limited seating capacity of the orchestra suggests that the main floor was not very deep, either. The enormous gallery must have been high and steep, and considerably deeper than the main floor, and thus poorly suited for watching a screen set within the 35-foot wide proscenium. The lower seating capacity in the theater’s later years must have resulted from the closing of the gallery, or at least the greater part of it.