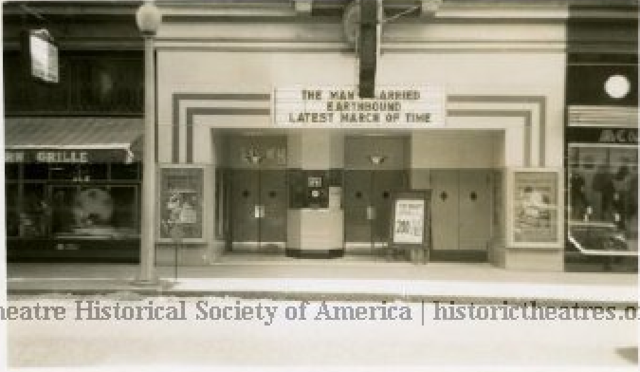 It was demolished many decades ago.

“Shortly after the turn of the century, Lynch’s Theatre opened across the street [from the Olympia] at 41 Main. From its original vaudeville fare it switched to movies, changing to the Rialto, offering "Entertainment to Chase the Blues Away” and “Free! Beautiful! Five Piece Dinette Set. Bring your green coupons” (according to a 1944 ad)."

An item in Boxoffice magazine, November 30, 1946 mentions the reopening of the Rialto after having been closed for nearly two years:

To Reopen at Woonsocket
WOONSOCKET, R.I. – The Rialto, 800-seater, is to reopen after being shuttered since February 1945. Maurice Saffner, owner, said the theatre’s policy would be reissues, and foreign films, with the house being managed by his son, Melvin Saffner.

The Rialto, Woonsocket, R.I., will reopen September 20 with its regular policy of re-issues and first run foreign films. The house is owned by Maurice Safner but is the “baby” of his son Melvin, who is manager. The foreign element of Woonsocket is predominantly French (about 30,000) but the theatre has a large followig of Italians from surrounding cities and towns. Thus, such films as “Shoe-Shine,” “Panic” and “Open City” have been a good draw at the Rialto, which was closed for the summer months.

[Note: of the three titles mentioned, “Panic” is a French film, the other two are Italian. In Woonsocket, the Laurier often showed French films over the decades.]

The Rialto, Woonsocket, R.I., owned and operated by Maurice Safner, closed since February 1945, will reopen this month. The house will play reissues and French and Polish films to cater to the large foreign element in the Mill city. Prices will be 50 and 16 cents. Melvin Safner, son of Maurice, who manages the Olympia across the street from the Rialto, will operate. The Safners now manage four houses, including the Laurier in Woonsocket and the Lafayette in Central Falls.

The Rialto Theatre had a fire in July 1924 which almost destroyed the theatre.
ARTICLE.

The Theatre Historical Society archive has the MGM Theatre Report for the Rialto; Card # 565. There is an exterior photo taken May 1941. Address is 41 Main St. Condition is Fair. It was showing MGM films. There were 577 orchestra seats and 223 balcony, total 800.

The Rialto was previously known as Lynch’s Theatre.

A previous name for this theatre was SMITH’S Theatre, per a 1922 directory.