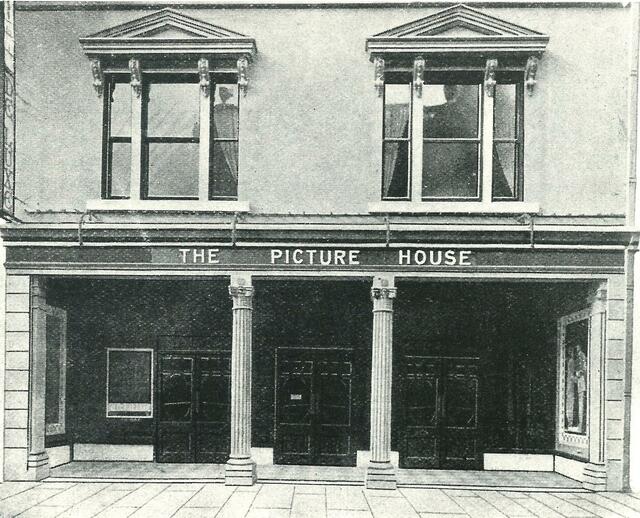 The first advertisement announced that the management had been able to arrange a special exhibition, for one week only, of Kinemacolour: “See the latest and most perfect production of pictures in Natural colours depicting the "Fighting Forces of Europe”, as now showing at the Scala Theatre, London, to crowded houses. Everybody in Cheltenham must see them". Shows were at 2.30pm, 4.30pm, 6.30pm and 8.30pm, with admission costing 9d for the “front balcony” and 6d and 3d for the “body of the hall”. The proprietor was T. H. Poynton.

Just a few months later, from Monday 23rd November 1914, the cinema’s name was somewhat ‘downgraded’, with “Royal” being removed. The histories I have seen all have this as the ‘North Street Picture House’ for the remainder of its cinematic life. However, while this is, of course, geographically correct, a photograph of the cinema dating from c1920, in the Cinema Theatre Association Archive, shows this as simply ‘The Picture House’. The general manager at this time was S. C. Field, and the first film under the new regime was “Lord Kitchener’s New Army”, presented with an augmented orchestra.

The Picture House was never converted to sound, and closed on Saturday 25th July 1931. At the same time the owner, H. G. Beard, converted his other cinema in the town, the Coliseum (see separate Cinema Treasures entry) from live shows to full-time ‘talkies’. The final films were “Youth”, starring Ivan Hedqvist, and Luciano Albetini in “The Chase for Millions”.

The building became the Repertory Theatre (as a replacement for the loss of the live presentations at the Coliseum?), but this only lasted until March 1933.

It was then taken over by the Gloster Aircraft Company and used to manufacture air frames. After the war, it became North Street Motors. It has since been demolished.