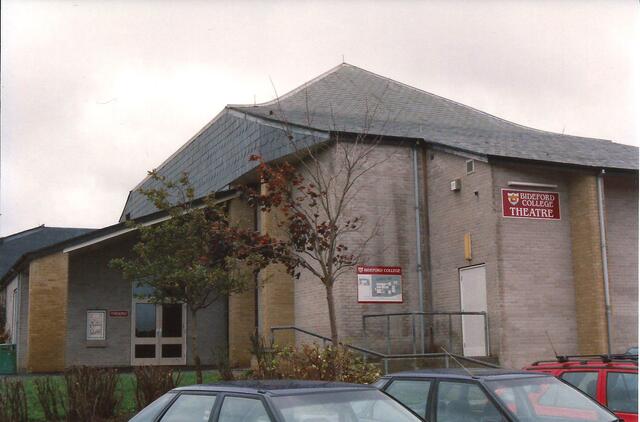 In Bideford, Devon, the closure of the Strand Cinema in May 1981 (see separate Cinema Treasures entry) left the town without big-screen entertainment. Presumably as a way of remedying this, the theatre at Bideford College was opened for public film shows from around 1988, using 16mm projectors.

Live shows continued, interspersed with the films. However, in March 1998, the film shows were suspended when the projection equipment failed.

In July 1998 a major refurbishment was announced. In October 1998 a grant of £45,000 was received from Bideford Bridge Trust, enabling the purchase of the latest projection and sound equipment. It was hoped the cinema would re-open at Easter 1999.

Torridge District Council gave a further £12,000 in December 1998, which was used to install 181 new seats. These can be folded away electronically at the back, enabling the hall to host a wider variety of events.

The cinema eventually re-opened on 31st April 1999 with “Shakespeare in Love”, starring Joseph Fiennes. Films were shown seven nights a week, except for occasional stage productions. The original 16mm projection equipment had been replaced by 35mm projectors and Dolby Surround sound had been installed. A 38ft wide screen was also installed. In a nice nod to days gone by, the National Anthem was played at the end of each evening.

It is unclear when the regular public film shows ceased. However, film shows are continuing on a part-time basis, overseen by Bideford Cinema. This, in turn, is run by Bideford Film Society, a not-for-profit community group founded in 2001. (Bideford Cinema also presents films at Kingsley School, Northdown Road, Bideford).