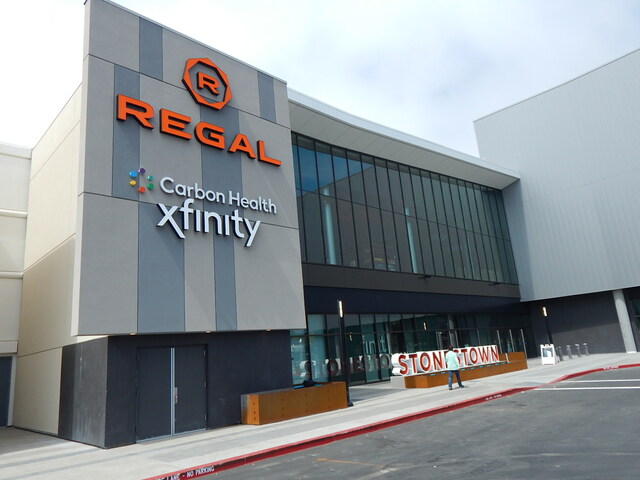 The new address for this new Regal Stonestown Galleria 12 Theatre is 3251 20th Ave San Francisco CA just one block in front of the old UA Stonestown Twin do to be torn down soon.

The outside of the new 12-screen Regal Stonestown Galleria ScreenX, 4DX & RPX in San Francisco. The new movie theater is set to open to the public Friday, May 21. It will offer $3 movie tickets through May 26. Photo: G. Allen Johnson, San Francisco Chronicle Movie theaters are not only reopening in San Francisco during the pandemic, new ones are opening.

Regal announced that the long-awaited debut of its newest state-of-the-art theater, the 12-screen Regal Stonestown Galleria ScreenX, 4DX and RPX, will happen Friday, May 21, with a slate of current films including “Spiral: Saw.”

To celebrate the opening, movie tickets will be $3 for all shows through Wednesday, May 26. “A Quiet Place Part II” and “Cruella” open on Thursday, May 27.

“Regal is redefining the moviegoing experience at Stonestown Galleria where guests will enjoy the latest in technology and amenities, including three premium format auditoriums,” said Richard Grover, vice president of communications at Regal, in a statement released Tuesday, May 18. “We always strive to be ‘the best place to watch a movie’ and are excited to provide San Francisco moviegoers a new theatre with top-of-line technology, delicious concessions and memorable experiences.”

The Stonestown theater, which has been under construction for more than two years, replaces the mall’s Macy’s department store that closed in March 2018. The opening could be good timing for Regal: Brookfield Properties, the owner of Stonestown Galleria, announced plans this March to transform the suburban-style mall into a neighborhood with nearly 3,000 housing units, six acres of green spaces and a new 20th Avenue that would become a “main street” lined with shops and residential buildings.

Regal, the Knoxville, Tenn.-based theater chain, a subsidiary of the Cineworld Group, operates five other movie theaters in the Bay Area. Regal’s Jack London in Oakland and Regal UA Berkeley reopened on Friday, May 14, joining the previously reopened Hacienda Crossings in Dublin.

Regal’s Crow Canyon in San Ramon still has not reopened. Also unclear is the status of Regal’s UA Stonestown, which opened on Nov. 10, 1970, with the Barbra Streisand film “The Owl and the Pussycat.”

Unlike other chains, Regal did not reopen theaters at all during 2020 after the onset of the COVID-19 pandemic shutdown in March, not even during a period in the fall when coronavirus cases were lower and as some theaters reopened before another shutdown in December.

Regal operates 519 theaters — for a total of 6,914 screens — in 42 states along with the District of Columbia and Guam. Cineworld is the second-largest theater chain in the world and in the U.S., behind AMC Theatres.

are they all recliner seating. some screens say reserved seating, but not recliner Also it looks like 3DX not open

Not all the new auditoriums at the new Regal 12 SF have electric true recliner seats. Some just tilt back a little when you lean back. The current seat count is listed in my report. The 4DX® screen auditorium Theatre #1 is still being tested and when they find a movie when ready It will open. Too bad It did not make this opening week but It is coming soon.