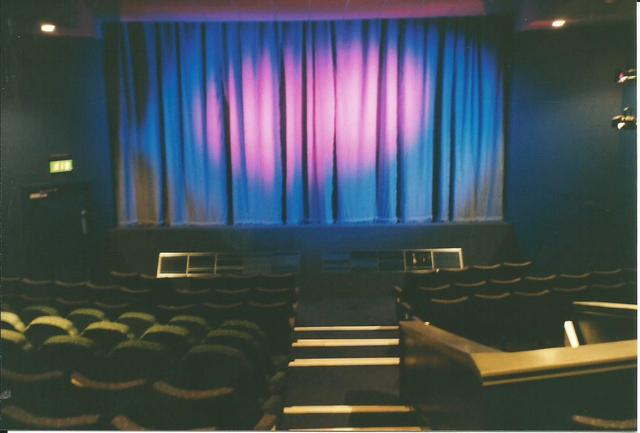 This started life as one of the seven great Paramount Theatres, built by Paramount Pictures Inc. in the UK. With a full stage, a Compton organ, a large café and an elaborately decorated auditorium with 2,670 seats in stalls and single balcony, the Paramount Theatre was the pre-eminent cinema in the city.

It opened on 15th October 1934 with Claudette Colbert in “Cleopatra” with a stage show and organist Rex 0'Grady playing the Compton 4Manual/12Rank organ. It was the largest cinema in the Merseyside area and cost £240,000 to build.

The cinema was decorated in 1930’s Art Deco style with unusual metal grilles either side of the proscenium arch topped by drapes. Lighting was entirely indirect. It was taken over by Odeon in 1942 and almost immediately renamed.

The decorative features were entirely destroyed in 1968 when the stalls and balcony were separated to form two individual cinemas seating 989 in screen 1 (the extended balcony) and well over 1,000 in the huge stalls (screen 2) which opened on March 20, 1969. Odeons 3 and 4 were created by sub-dividing screen 2 on December 23, 1973 with the front portion retaining 595 seats and the new auditoria at the rear containing 167 seats each. A large bar in the former circle foyer was in 1979 converted to Odeon 5 with 148 seats.

In Autumn 1999, the building was further subdivided when additional screens were divided out of screens 1 & 2 and an additional 180 seat screen was added on what had been the former stage.

The façade was covered with sheet metal cladding.

The Odeon was closed on 30th September 2008, being replaced the following day by a purpose built 14-screen Odeon multiplex in the Liverpool ONE centre, located on Paradise Street in the city centre. Demolition of the Odeon began in November 2010, and was completed in March 2011. The plot of land was used for car parking for a while. In 2017 a block of student accommodation with 488 rooms named The Paramount was built on the site.

Yes, the two buildings are much older than the cinema.
You can see where the one facing London Road was cut short to allow for the entrance to the cinema.
Ma Egerton’s was originally on the site where the Forum was built in Lime Street, so it would have moved after June 1929.
(I’ve got a copy of a press cutting from June 1929).
That story you heard must have been from somebody who got their facts wrong.

Not having looked up this cinema on CT for some time I was saddened when in Liverpool yesterday to see that the Odeon was no more,I asked a chap working in a shop opposite as to when it was demolished, and he said it was a couple of months ago,anything to get rid of me I suppose. I decided to take a picture anyway, I wonder what happened to the plaque honouring the late Liverpool film star John Gregson, which I remember being unveiled although I never saw it myself.

Former Liverpool projectionist Mike Taylor says he ran the Sound of Music in 70mm for nearly two years. The equipment was then Philips DP70 projectors. When it was the Paramount Simplex machines were in use. Kalee 21 and Cinemecanica equipment was also used when an Odeon.

This was the only one of the Ex-Paramounts to become the city’s Rank roadshow house. In Birmingham it was the West End and later the Gaumont, in Manchester the Gaumont and the Oxford, in Leeds the Majestic, in Newcastle the Queens and the Pavilion and in Glasgow the Gaumont. Usually smaller seating capacities were preferred for roadshows.