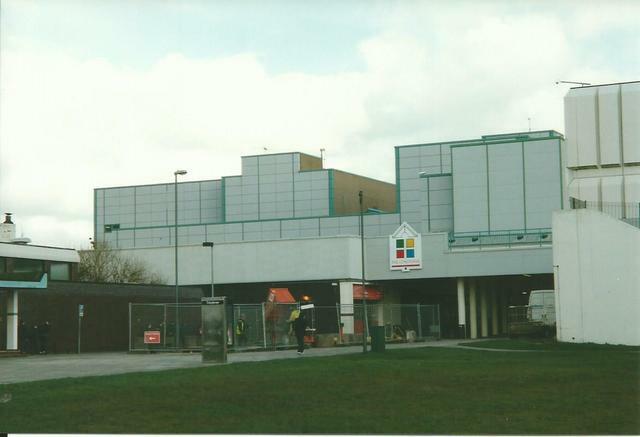 In Skelmersdale, Lancashire, the Concourse Shopping Centre opened in 1972. In late-1971 it was announced that the American based Network Cinema Corporation, which Jerry Lewis was major shareholder, were planning a chain of Jerry Lewis Cinema in the UK. Opened in 1973 as the Oscar 1 & 2 Cinemas, almost as soon as they were opened, former boxing champion Billy Walker had purchased the Jerry Lewis franchise in the UK (only 2 cinemas in the chain had be built:the first was in Corby, Northamptonshire, out of a planned 32 cinemas). Within a year of opening it had been re-named Focus Cinemas, as the Academy of Motion Pictures Arts and Sciences in Hollywood, California had objected to the ‘Oscar’ name being used.

Built under the bus station, the screens were side by side and seating was provided for 230 & 248. It was equipped with Phillips FP 20 projectors and a Western Electric(WE) sound system. By 1980 it had become part of the Brent Walker Cinemas chain. In 1982 Brent Walker put their cinema chain up ‘For Sale’. The Skelmersdale Focus Cinemas were sold for 1p (one penny!) to Les Castree, a cinema engineer and former proprietor of the Stone Picture House. The Focus Cinemas were then sold to Preston Film Services, a film equipment dealer, with no knowledge of running a cinema. They removed the projection equipment in the cinema and installed inferior equipment. The cinema ran open & closed for a couple of months until it closed permanently and went over to use as a bingo club.

It was not to be until 2012, when a £20m “vision to create a thriving town centre for Skelmersdale” was revealed, that filmgoers were promised a return of ‘big screen’ entertainment. The proposals included a new food store as well as a number of bars, shops and restaurants, and a five-screen cinema.

However, the proposals, at least insofar as the cinema was concerned, were scaled back. In January 2020 work began on a ‘New’ two-screen cinema, albeit turned out to be a revamp of the space previously occupied by the Oscar/Focus Cinema.

Each 125-seat auditorium is “fitted with comfy, Italian leather high-back chairs, each with 1.5-metre spacing between rows, to create a luxury feel with additional legroom”.

My initial understanding was that Ultra Star Cinema was being operated as a franchise of the American-based parent company, which was founded in 2004 and operates cinemas in California and North Carolina. Asif Sahil, who has been in UK exhibition over the years, including running the Cineplex Cinemas in Kirkby-in-Ashfield (former Regent Cinema) and Hucknall(former Byron Cinema) (see separate Cinema Treasures entries) was said to be the managing director of Ultra-Star Cinemas in the UK. Indeed, he announced that he was “focusing on making this state-of-the-art cinema a community-led facility, with a focus on affordability”.

However, I now understand that Ultra Star have denied any involvement with Mr. Sahil and they requested that their branding be removed.

When the cinema opened on Monday 17th May 2021, new releases were said “to be not available until July (despite circuits presenting them from May). So the Ultra Star Cinema opened with reissues, screening Tom Hanks in "Forest Gump” and Al Pacino in “Scarface” from Monday to Thursday and then comic book epic with Brie Larson starring as “Captain Marvel” and Kevin Spacey in “American Beauty” from Friday to Sunday during opening week. All shows were evening only, at around 7pm, with a single ticket price of £3.00.

However, it subsequently transpired that films are being shown on DVD/Blu Ray, not professional industry standard digital projection. So the cinema does not appear to have the capability to screen new releases.

Mr Sahil also said “This is our first cinema project and we want to get it right. We wanted to come to Skelmersdale because of the regeneration plans for the town, and the Concourse Shopping Centre was the perfect space for what we envisaged”.

Unfortunately, it seems, the Ultra Star Cinema was not to last. On Sunday 20th June 2021, after showing reissues of the animated children’s favourite “Cars” (Screen 1 at 6pm) and the 1982 horror film “Poltergeist” (Screen 2 at 7pm) the cinema cinema closed. No further screenings were advertised.

On 2nd July 2021 it was announced that the cinemas had been taken over by Sam Leavington, operator of the Stafford Cinemas (former Odeon, Stafford) and it will be reopening as the Capitol Cinema.