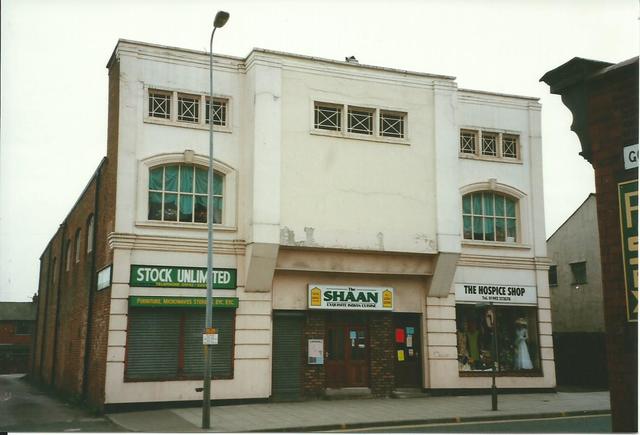 In Pemberton, adjacent to Wigan, the Queens Cinema was built in 1916 by Eagle Picturedromes. In 1932 & 1933 it was operated by the J.F. Emery Circuit. By 1937, the local Watch Committee had approved plans for a major extension and refurbishment programme that saw the seating increased from 508 to 780.

Perhaps there was further refurbishment after the war, as the 1953 Kinematograph Year Book gives the seating capacity as 888 (with the cinema still owned by Eagle Picturedromes).

The Queens Cinema was equipped for CinemaScope in 1955, the first such presentation being “Beneath the 12-Mile Reef” starring Robert Wagner and Terry Moore.

The Queens Cinema closed in 1964. It remained empty for many years before being converted into a squash club in 1979. More recently (and when I visited in April 2001) the building was home to retail units and Shaan Indian restaurant. It had been demolished by 2021 and flats had been built on the site.