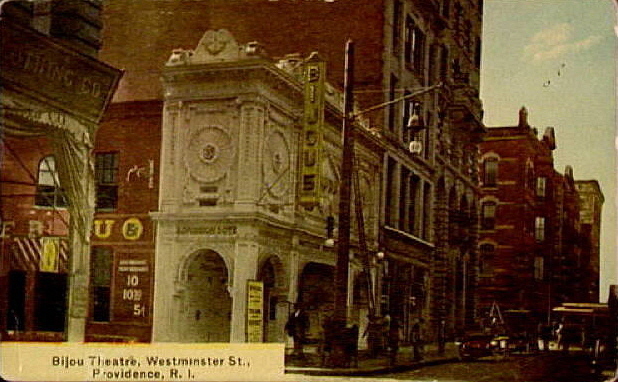 The Bijou Theatre in downtown Providence was opened in 1908 and closed in 1925. It was razed many decades ago.

It was located right near the historic Providence Arcade building.

Gerald, I’ve been trying to respond ever since you posted your recent postcard! I finally resorted to contacting the site managers and was told to log out and then log on again. When I submit, nothing happens! This is a test — if it goes through, I’ll return and make my comments. Thank you again! Marialivia

Ah, success!! (It’s actually 6:08pm, not 3:08, however.) First, the postcards are wonderful! The later one, with Union Trust on the right side, is across from the Howard Building, where I worked for 4 years from 1950-54 — the building was irreparably damaged by one of the hurricanes (Hurricane Carol maybe?) Also, we hung out in Gibson’s (later McGarry’s) at street level. I was in error in a previous posting when I referred to the Prov. Gas Company being located at Westminster and Orange. Actually, it is at the corner of Weybosset and Orange, a block away. This Bijou was before my time — it’s the other one I remember, the one further west on Westminster. (The Howard Bldg. was at 171 Westminster and the Union Trust at 170. I believe these are still the addresses.) SO the Bijou would have been close to them at 164. Marialivia

Hey Marialiva, The Howard bldg. is still in use today!
Perhaps a little off topic, but found some unbelieveable images of old RI postcards and photos here, including a nice one of Weyboseatt/Lowe’s State. Numerous other images and some theatres.
www.artinruins.com/arch/historical/postcards/#

Good Morning! Yes, the “replacement” Howard Bldg. is still there. I retired from my job in Prov. in Oct. of 2003, but I seem to remember the “old days” much more clearly! I loved the OLD Arcade (before it was “spruced up” and miss the nice restaurants and tearooms). Thanks so much for the link — can’t wait to look at it! ML

“Peter R. Nelson, one of the best-known and well-loved showmen in the state, recently died at the age of 76. Nelson was at various times owner of the old Auburn Theatre and the Park in Cranston. At one time he also was associated in the operation of the old Bijou in Providence and the Royal in Olneyville. Entering the theatre business in 1920, he operated the Auburn for three years before selling his interests to the Park Theatre Corp., of which he remained a partner until 1936 During the period from 1933 to 1936 he operated the Park. For more than 30 years he also operated a store in the Park Theatre building, retiring in 1951 because of his health.”

This theatre was part of the September 1923 6th Paramount Week. In this advertisement from the (Providence) Evening Tribune, September 1, 1923, we see a fascinating list of Rhode Island area theatres, many long-gone and long-forgoten, or even unheard of, as well as what they were showing during that week. Rudolph Valentino in Blood and Sand was one of the offerings here. CLICK HERE and move image to see all theatres.

In September 1920, this theatre was part of the celebration of the 3rd annual Paramount Week. CLICK HERE for all participating RI area theatres and the titles of the films shown.

The first three full-time downtown Providence movie theatres were these: Nickel, Scenic Temple, Bijou. There are others that did show films previously but they were sporadic showings, or in the case of the Lyric, short-lived. Movies were the main policy, though the Scenic Temple did include vaudeville acts. This ad from August 1, 1908 makes clear the growing trend: moving pictures are here to stay! They are not a mere innovation.
NICKEL, SCENIC TEMPLE, BIJOU