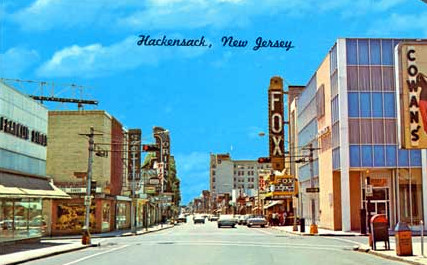 The Oritani Theatre first opened on May 6, 1926 with Irene Rich in “Lady Windermere’s Fan” & Lloyd “Ham” Hamilton in Nobody’s Business". Organist Stanley C. Wallace opened the ‘mammouth’ organ. It was designed by architect’s David Lehman & William E. Lehman. Named for a local and long deceased Indian chief, the theatre had a single floor auditorium, the ceiling of which sported a tent-like dome made from fireproof fabric.

For most of its life, the Oritani Theatre was operated by Stanley-Warner as Hackensack’s main rival to the larger Fox Theatre, which was directly across the street. Twinned in the mid-1970’s, it was tripled on April 21, 1978 and closed in 1983, by which time it was part of the merged RKO-Stanley Warner-Century Theatres company.

The auditoriun was demolished in 1985, leaving the front section of the building and its foyer in retail use.

One warm summer night in 1978, I was hanging out in the office of The Oritani with a friend who was the relief manager. For years the only part of the marquee that lit up was the back lit side panels announcing the current movies. I mentioned this to him, and he told me that it all worked, they were just under orders not to turn it on to save money on electricity. He opened the breaker box and though some switches, we walked out onto the street, an it was a spectacular site. All the flashing neon and sequencing bulbs in the letters were flashing. It lit up main street for blocks in either direction. I wish I had a camera that night, it was probably the last time the marquee was ever turned totally on.

Even in 1978 they were trying to save a buck.good story.

A belated Happy Birthday to the Oritani. If it had survived, it would have been 85 years old back on May 6, 2011.

When my mother asked for “two tickets in the Loge,” I had no idea what she meant."

I remember well in the mid sixties taking the #1 bus from Teaneck to Hackensack for 15 cents to spend an all day adventure walking up and down Main St. I would visit the army navy store and look through all the army surplus gear, Woolworths, check out the latest 45’s at the record shop next to the movie theater. I would either eat lunch at Woolworths, followed by their 9 cent ice cream waffle sandwich, get a couple of slices at the pizza place on the other side of the theater, or get a ½ sub for 35 cents at the Blimpie Base. I think the movie cost. 75 cents for a kid back then. Both the Oritani and Fox showed two feature films plus the Warner Bros cartoon. Check out Cowan to look at new baseball gloves. Main St also had toy stores, model shops that you could spend a lot of time looking around. At that time I guess Hackensack felt like New York City to a young kid from Teaneck. Back then the movies had a crew of ushers, with flashlights, to keep things quiet. I wish theaters today would have ushers roaming around, I always seem to sit behind Chatty Cathy whenever I go.

Tomorrow the movies will return to Hackensack with the opening of an AMC Lux Dine-In theater, the first of its kind in the country, at the former site of the Saks Fifth Avenue at the Shops in Riverside. 9 screens with dine-in delivery along with recliners will be there. All the showings of It are sold out. Somebody should put out a listing of that theater.

> an AMC Lux Dine-In theater, the first of its kind in the country

Eh? Have you been to the iPix Luxury Theatre in Fort Lee or Brooklyn? The iPix chain has been around for years with powered recliners, waiters, and good food. 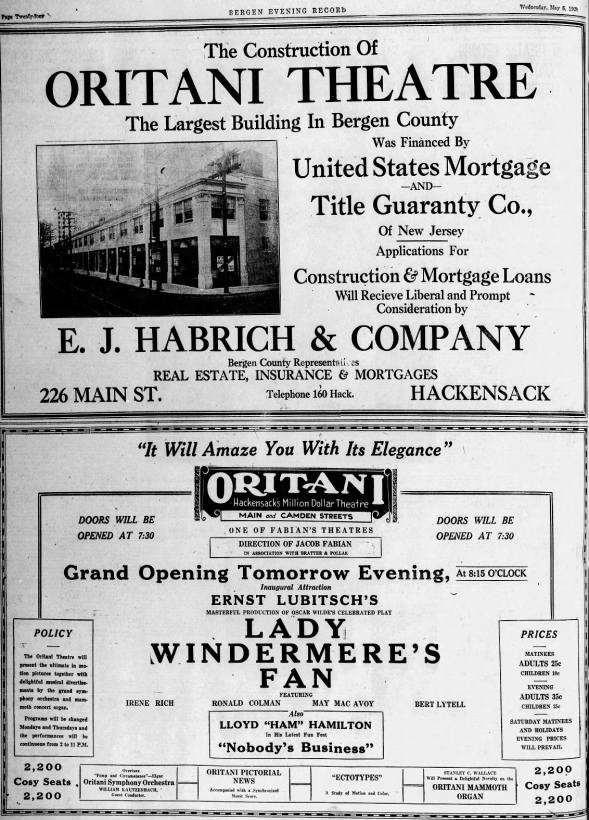