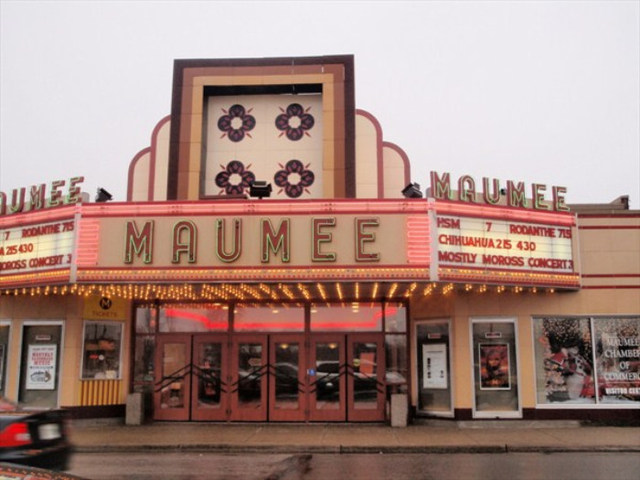 Opened on September 1, 1946 with Tom Breneman in “Breakfast in Hollywood” & Ted Donaldson in “The Return of Rusty”. The New Maumee Theatre still has its original Streamline Moderne style tower that’s located above the marquee. It was originally a single screen theatre with 750 seats. This has now been reduced to 494 and a second screen seating 125 has been added.

The city of Maumee purchased the building in 2000 and restored and renovated it in 2003-2004. The theater now shows second-run films and is operated by Great Eastern Theatres.

The Maumee Indoor Theatre was placed on the National Register of Historic Places in 1998.

I just saw this theatre on May l6, 2004. The funding for the restoration came from city funds. Much of the restoration monies were spent to widen the theatre to provide access to the additional multi-functional facilty built behind the theatre. The addition can be used for a variety of functions including movies. A removable platform which is used when movies are shown provides stadium style seating for 100. When the platform is removed the floor is level and options are unlimited. A wedding reception has already been booked for September.
The theatre was formerly owned by Great Easten Theatres ( they also own the Paramount in Fremont, Ohio) who operated the theatre until 1996. It stood empty from then until its grand opening on May 8, 2004.
The lobby, exterior and the marquee were all beautifully restored and while the auditorium is nice, there’s not a lot of visable features to remind you you’re in a 55 year old theatre. The walls have all been covered with pleated sound curtains. The six or seven beautiful deco sconces on each side of the auditorium, however, help to beautify the uninspiring sound curtains.
The Maumee has a chance of survival because of the city ownership. The 12 screen multiplex a mile down the road would, unfortuantely, make private ownership impossible. Not too many miles down the road from the first multiplex is an even bigger multiplex.

It is now up and running

Thanks, Evan, for posting this theater. I remember as a kid in the 60s spending every Saturday afternoon here with a million other kids. Around Halloween, they’d show scary movies and have an employee dress up as Frankenstein and lurch up and down the aisles.

The water fountain was built into an alcove in the wall that, to me as a kid, looked like a tombstone.

The new website is up and can be viewed at http://www.maumeeindoor.com/

Lower Level (Venue #3) of the complex accommodates up to 100 people in a variety of seating arrangements.

This was part of the Donald Young chain in the early sixties. The Strand Theater in Maumee was also operated by this circuit at the time.

The Maumee Theatre was taken over by the Great Eastern Theatre Co. in 1987, according to an article in Boxoffice Magazine’s November issue that year. The former operator, Armstrong Theatres, had gone out of business. Great Eastern took over Armstrong’s Cla-Zel Theatre in Bowling Green, Ohio, at the same time. Various other Armstrong houses were taken over by other operators, or closed down.

In 1987, the seating capacity of the Maumee was 750, according to the Boxoffice article.

The Maumee marquee can be seen in a cable promo spot for CurrentTV’s “50 Documentaries To See Before You Die”, hosted by Morgan Spurlock. The show’s title is on display on the illuminated marquee, with the host standing below it as I recall.

Too bad they gutted the inside and made it smaller. I grew up going to this theater in the early 70s—never missed a Saturday matinee as a kid. Mrs. Steiffert was the manager—super nice (the people that run it now? Rude). Whatever character the theater had back then—the beautiful oak paneled lobby, the stone inset drinking fountain, the wrought iron staircase to the upstairs bathrooms, that huge purple neon clock, the outside ticket booth, the massive wooden doors to the theater—were all ripped out when the city “improved” the theater. Being inside it is like being inside any new anonymous theater now. Pointless. But then again, the city of Maumee never listens to its citizens. As for the outside renovation, the metal panels are rusting and the paint is faded, and no one is doing anything about it. Typical for a government-owned entity. Going there is zero fun.

I believe the architect is George Howard Burrows, not Barrows.