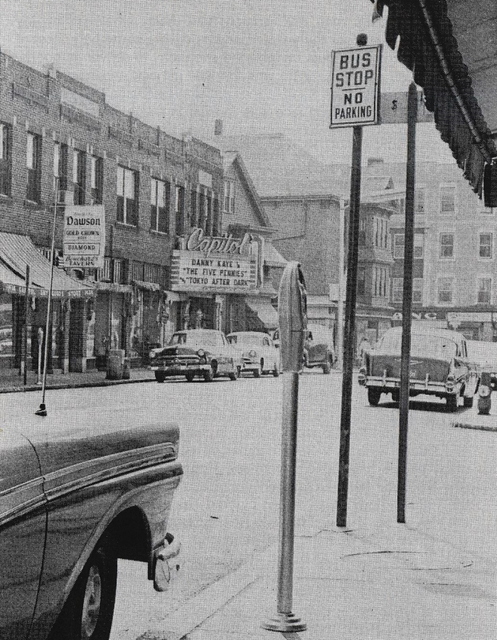 The Capitol Theatre was opened November 29, 1920. It closed as a movie theatre in the 1960’s and became a rock concert venue in the 1970’s, finally closing in the 1980’s. Closed for many decades. The auditorium seems intact, with the former lobby area used as commercial space.

One of my friends tells a funny story about the Capitol Theater. When he was a young fellow in the 1960s, he went there to see a double feature: Way Way Out * with Anita Ekberg, and The Fantastic Voyage with Raquel Welch. Noting that both these starlets were voluptuous women, he says he remembers that night’s cinematic experience as “an evening of booberama.” The Capitol Theater was erected in 1920 as part of a block-long structure created by the development team of Allen-Charette, who emblazoned their names for posterity on the brick facade just below the roof-line. The name Capitol is also still etched in stone above what used to be the theater entrance, although the glittering marquee is long gone. Built on the site of the Old Timothy Coffin estate, the Capitol passsed through the hands of numerous owners, including the Zeitz family of Zeiterion fame. One lady remembers a dapper gentleman named Butch at the Capitol, a short man in a soft hat who did double duty as usher and ticket taker. By the late 1960s, the films being shown at the Capitol got a little ragged, such as one high-browed offering entitled I Spit on Your Grave. In the 1970s there were rock concerts and other special events. Sometime around 1980, the lights came down at the Capitol Theater for the final time.*

1959 photo of the Capitol Theater when it was showing The Five Pennies and Tokyo After Dark.

The Theatre Historical Society listing for the Capitol in New Bedford, compiled by member Barry Goodkin, states that it opened on Nov. 29, 1920, designed by Labrode & Pullard, with 1000 seats.

I used to go to the Capitol Theater in New Bedford’s North End in the 50’s and early 60’s.

Then the Capitol featured two continuous movies and five Looney Tunes cartoons. The admission was 12 cents on Saturday and 25 cents on Sunday. It was a very popular pastime for the kids.

Candy Bars were 5 cents and Popcorn was 10 cents. We had a 5 cent bottle Coke machine until someone threw an empty bottle. The kids from our neighborhood pretty much “owned” the right front theater seating and everyone just knew that. Our friends always hung out together.

Butch was the ticket man. He dressed in the sharp red traditional theater uniform and hat. But Harold was the usher and he never failed to annoy us with his flashlight. One day he annoyed someone a little too much and the customer just happened to know the theater owners. There was a complaint made. Harold was more than likely given a “talking to” by the owners. After that, Harold was a little more courteous with us during his patrols. But some said he had taken ill.

Around the 1970’s a New Bedford Standard Times Newspaper writer featured a story in which he colorfully depicted how “I Was A Saturday Afternoon Cowboy at the Capitol Theater.”

He captured the moment and how he enjoyed the double continuous feature Western movies and bonus five cartoons. Then he colorfully depicted how on the way home he and his friends rode stick horses and galloped in and out of the New Bedford, Acushnet Avenue’s store front doorways.

He colorfully depicted his Capitol Movie Theater childhood days and now mine.

Photos of the Capitol and other New Bedford theatres can be seen in this great set:
View link

The Capitol is listed in the 1927 Film Daily Yearbook as having 1400 seats and open daily.

My father, Gilbert Hemenway, was a projectionist at many of the New Bedford area theaters, starting at the Allen Theater where he and his brother George were trained by their brother Floyd to be projectionists. In those days you had to study electronics and get a license to be a projectionist. Union contracts specified a 2-man booth, as the projection rooms were called. My father started as a ticket-taker and usher and thats how my mother met him. In New Bedford they were the Capitol, Empire, New Bedford, Orpheum, Dartmouth Drive-In, and Fairhaven Drive-In. In Fall River it was the Plaza and the Embassy – and there was the Newport Theater which I cant find in the RI listings; it was across the street from another theater in Newport. In about 1948 when I was about 5 year old, my mother and I would go to the Dartmouth Drive-In in our Chevy Coupe and I would sleep on the shelf in the back. Before I was born my father worked other theaters. I think one was the Keith in North Fairhaven.

At the Capital Theatre, I remember Butch taking tickets. I didn’t have to give him a ticket because my father was a projectionist there. Butch always called me Donald. When I called him on it he said that I looked like a Donald. I lived at 254 Coffin Avenue, near the bakery. On the Saturday matinee they made all the kids sit up front and I hated that because of all the noise the kids made. Smoking was in the mens room – you could hardly breath in there because of the smoke. Next door was the Capital Candy Shop and there was a side door from the theater by which you could enter. They had a sundae for 20 cents with peach melba in grenadine syrup and hot marshmallow on top. It was called a Buffalo Tip.

With the advent of television and theaters going dark, toward the end, and found some work with the Fall River Local. When the Fairhaven Drive-In opened, there wasnt a speaker in the projection booth so that the projectionist could hear. My father took a ramp speaker and ran a wire up along the ceiling to the amplifier. In 1990 I went there and noticed his speaker. I now have it, as a momento of my father. I was amazed at the equipment that was still not vandalized. The same with the Dartmouth Drive-In and the Westport Drive-In. I took the reel of film that they used to announce intermission time.

Most of the building is unused shuttered shops. In the back you can still even get a glimpse at the theater. This theater is slowly falling apart. Used by the Jamaican store out front as storage, mostly for bottle returns/redemption. The stage is subject to a leaky roof as is the unused areas in the back such as the bathrooms and projector room. Except for the slanted cement floor, the rest of this theater is unsafe, and a shame.

It was built as part of a block long structure on the site of the former Timothy Coffin Estate. In “the old days”, it featured two continuous movies and five Looney Tunes cartoons as well as evening shows.

Admission was 12 cents on Saturday, and 25 cents on Sunday candy bars were a nickel and popcorn was 10 cents. Kids loved it..

Films were shown into the 60’s and by the seventies several rock concerts were performed there. It closed for good in the early 1980’s

Article on and video of the deteriorating Capitol Theatre: https://www.southcoasttoday.com/news/20191214/capitol-success-immigrant-businesses-to-take-center-stage-at-historic-north-end-new-bedford-theater