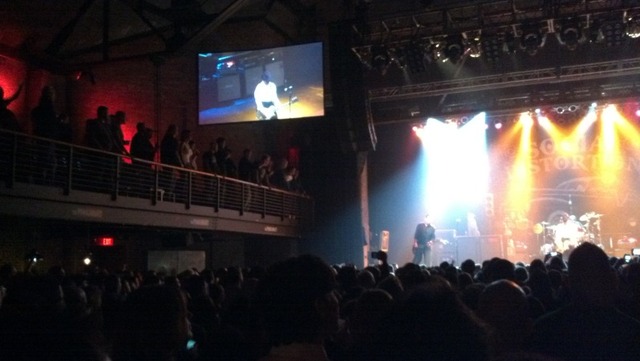 The 1,666-seat Huntington Theatre first opened May 5, 1927 and was one of the first theatres built beyond the New York City limits by A. H. Schwartz, in this case before he started the Century Theaters circuit. Until the arrival of “talkies”, the Huntington Theatre presented vaudeville with the movies. For decades, Century’s Huntington Theatre was considered one of the top theatres on the North Shore of Suffolk County, but it eventually fell victim to multiplexes in shopping malls.

After Century Theaters became involved in a merger with RKO-Stanley Warner, the Huntington Theatre was actually abandoned and left to deteriorate. In 1976, a local dance company considered taking over, but found little left of the auditorium except the large balcony, which now overlooked empty space. A new stage had to be built, bringing it up to the balcony level. The dance company went broke making the theatre operational again.

After that, several more attempts were made to revive the theatre by showing cult movies and presenting laser light shows, but all failed.

In 1983, the Inter-Media Art Center (IMAC), a non-profit performing arts group that had been using other facilities, took over the theatre and completed the work that started in 1976 with the erection of the new stage that used the former balcony as the auditorium. The leaking roof was repaired, new electrical wiring, heating and cooling systems, dressing rooms, and toilet facilities were installed, all in a matter of weeks so that IMAC could open in the spring of 1984.

Starting with a five-part dance series, IMAC met public and press acceptance and has been operating ever since. Most of its concerts are musical, covering jazz, blues, folk, country, contemporary, and international, but also include dance and theater.

IMAC moved out of the building in mid-2009, due to large the large overheads with maintenance. On September 30, 2011, it reopened at a concert venue known as the Paramount, now with a 1,555 seating capacity.

Uploaded three photos of the theater in its IMAX days, the façade just before the Paramount opening and the Paramount marquee. Now all I need to find are images as the Huntington Theater.

This is where I saw the Robert Redford picture The Hot Rock way back in the 20th century.

Next week I’m seeing Olivia Newton-John here in concert; I wonder if any of the old place still exists…

When I was 18. I got the job to fix a phone jack in the old theater. I worked all through Huntington stores and professional builds and still do today. I became the front phone guy to the theater An I was amazed how the place was built… and how it had endless storage. Some of the things I found were real cool. passage ways to a network of tunnels that went under Huntington. I was told is was set up as an early munitions hold. But its wet, dark and packed with history. Such a great Town Landmark. TG for the renovation. I feel it will be here for years.. Eddie

There is a big faux-pas in the overview. The Huntington Theatre closed in 1971-2 with “Fritz The Cat”, when the nearby Century’s Shore was finally twinned. It had NOTHING to do with Century’s takeover of RKO-Stanley Warner. That happened in 1983 or so. At a point about 1979, the balcony became known as the Balcony Theatre sort of making the theatre a stadium seater to the disliking of Century Theatres which had a clause of no movies being shown there. Ushers, employees and managenent were sent there over the weekends to do house counts on the Balcony,of course buying a ticket and changing into street our street clothes before going over there. They played cult,rock and other films but never mainstream first run product. How do I know????, because I was a Century assistant area manager at the York, Whitman and the Shore and I went to the Balcony several times. Please try to eliminate the “Century-RKO merger” from Warren’s comment, they are untrue. Corrections are necessary so that people get the best information from people who have experienced the situation.

I have many photos of the Huntington Theatre, but you’ll have to go to the Huntington Historical Society and the Huntington Library to access them and get permission to use them as I did. There all original photos and many more of the Station Theatre and others on New York Avenue. However Century ruled Huntington with five locations! There are original building and opening photographs of Century’s Huntington, real cool! I believe the lobby only has some theatre features. The Balcony had the original theatre’s features down to the spatter rug that Century designed for all their locations. A short live gym occupied the leveled orchestra floor. The Balcony was huge and used the the staircase, upstairs lounge and restrooms were from the original theatre and updated.

Orlando, the Huntington Historical Society has been involved with a renovation for a couple of years. I have been trying to get material from them, particularly images of the Station and Palace and the original and subsequent marquees of the Huntington for several years. I sent them them another email in September but have had no response.

I saw some, I guess, documentary on the space program at the Balcony. Quite a steep venue.

Uploaded a picture of the Paramount as it appeared when it opened as the Huntington which I found at Huntingtonhistory.com.

Rob, Go in person to Huntigton Historical on Main St. closer to Huntington Cinema Arts Center on the hill on the northside castle like historic building, you can’t miss it. They are very nice when I did a slide lecture in the historic Red Barn adjacent Cinema Arts entrance. I loved every one of the Century Theatres in Huntington and glad I worked them all (Exc. 110 Drive In and Huntington). In person is always the way to go and call for appointment so that they can have the materials for you to see. You’ll see pics of the Paramount marquee and a few others not mentioned on this site… and enjoy Huntington Main St. even though it has dramatically changed since the early 1980’s when it had the flavor of a true style Main Street. Try the Mexican restaurant 2 blocks from the Shore.

I saw the Allman Brothers here in July 1971. Unforgettable concert. The venue had a very cool vibe.