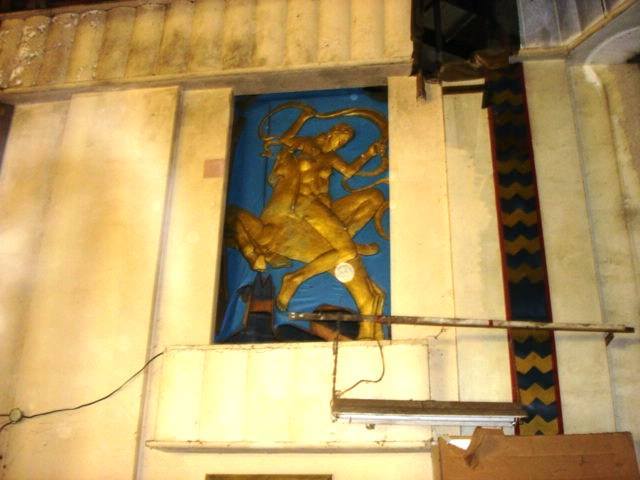 Small town theater which opened as Fords Playhouse in December 1925. In later years was known as the Fords Cinema.

See attached link for article concerning the restoration “vision”. Article dates the building to 1919 with the theater added in 1936.

Another article with photo:
View link

I was at this quaint little theater a couple times when I was in high school and dating a girl from Fords. This would have been around 1982 or 1983. I remember we were concerned that the little one screen theater seemed to be on its last legs at that time. Attendance was almost non-existant.

It amused us that the same man who sold us a ticket in the front booth, then walked back to the snack bar to sell us popcorn, after which he walked upstairs — presumably to turn on the projector! It seemed to be a one man show this night.

My girl and I joked (now this will really date us) that the man running the theater was like Sam Drucker on the sitcom Green Acres, who held many different jobs in the small town and would literally switch his hat while conversing with someone — in order to change the role he was in at that moment.

Sorry to hear the theater is closed, but really not unexpected. A loss nonetheless.

I saw several films here in the late 70s—early 80s, including Stripes, Gandhi, The Shining and Love at First Bite.

Drove by this place today. All storefronts abandoned and there are numerous red stickers on the glass fronts. Could not see what they were but my guess is unsafe to enter signs.

Locals are reporting at this time, Dec. 30, 2013 that there’s work being performed on the theater no other information is known.

Craig, please keep us posted. My father worked there as a projectionist in the 60’s and very early 70’s.

really sad… I LOVED this theater… spent every friday or saturday watching movies….

I lived across the street from the Fords Theater in the 1940’s and went there every time the picture changed. Back then it was $.25 admission and the movies were Roy Rogers or Gene Autry. I met my future husband there when he had a broken seat and I kept kicking it. We are now married 59 years thanks to the Fords Theater. My father owned JR’S Tavern prior to its present name.