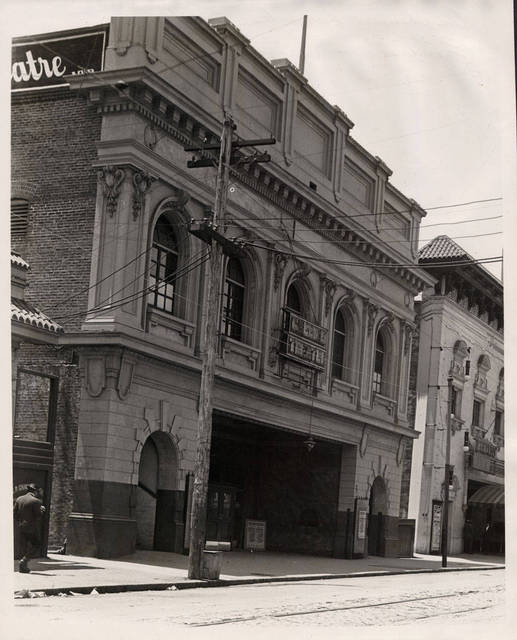 In later years it became a church, and was torn down in the early-1970’s. It stood immediately next door to the Princess Theatre/Ellis Theatre (qv).

Can someone identify this photo ? Is this the Orpheum that became the Garrick, the original downtown Orpheum, or the new downtown Orpheum of 1909? The postcard bears a 1912 postmark.

This 1907 Orpheum was designed by the architectural firm of O'Brien & Werner (Matthew O"Brien and Carl Werner) It was one of five San Francisco theaters they designed that were listed in an ad for the firm in the 1907-1908 edition of Henry’s Official Western Theatrical Guide.

An article about San Francisco’s movie theaters in the July 15, 1916, issue of The Moving Picture World said that the Garrick Theatre had 1,600 seats. In 1916, the Garrick was being operated as a five-cent movie house by Von Hagen Brothers.

Here is a 1907 postcard photo showing the Orpheum Theatre and its neighbor, the Princess, later to be called the Ellis Theatre.