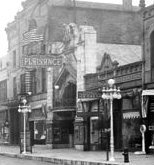 My grandmother told me about the Plaisance Theater when I was young, in the 1940’s. She said it opened about 1915 for vaudeville, but mostly just showed movies. It had a deep stage. A great little neighborhood theater, sitting on what used to be the main drag of the west suburban town of Austin, which was later annexed to Chicago.

It had an interesting layout. No doors into the auditorium, which was entered at an angle from the lobby. There was loge seating cut into the outside walls, which afforded a little more elevated comfort to the patrons. The concession counter was attended by the ticket taker, who would alternate between her booth on the left side on the entrance, and making popcorn.

TV killed its business by the mid-1950’s. It became a vacuum cleaner repair shop, and then was blitzed in the 1970’s for a senior citizen housing development.

Thanks for the pic. The street didn’t look all that different in the 50’s, but the theater had a standard type of marquee as opposed to the one shown.