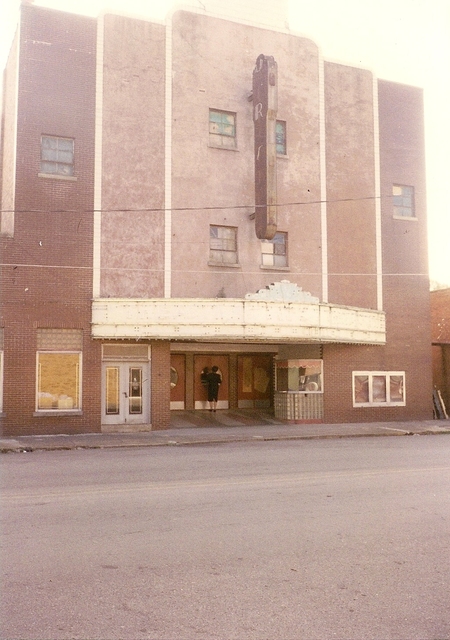 Replacing an earlier 140-seat Cricket Theatre at a different location on Main Street. This Cricket Theatre opened on February 12, 1946 with Betty Hutton in “The Stork Club”. Seating was provided for 570 in the orchestra and 270 in the balcony for the use of African-American’s. The tower clock on the theatre was originally part of an old courthouse in DeKalb, Alabama. It was closed in 1977 and is currently (2020) undergoing restoration

The correct name of this theatre is The Cricket – NOT the Ritz. I first saw “Gone With The Wind” in this theatre as a ten year old boy. It also housed the local telephone exchange, complete with “number please” operators, in rooms upstairs. The owner, Millard Weaver, also owned the phone company.

I am the Jim Dalrymple in the posting above. I did, indeed, see “Gone With the Wind” in THIS Cricket Theatre. However, it was around 1950 when it was in re-release NOT the original realease. (I was only two years old when it was first released.)

I used to ride at lease weekly with Mr. Millard Weaver to the Sandy Theatre in nearby Crossville. He also owned that theatre.

I never knew the theater as being named anything other than the â€œCricketâ€. The Cricketâ€™s days did not end completely in 1964. In 1966-1967 Millard Weaver, more for nostalgia than profit, reopened the Cricket on Friday and Saturday nights to show mostly â€œsecond runâ€ movies (recent films that had completed their showings in major theaters.) Unfortunately, television, automobiles (driving to Gadsden or Ft. Payne to see a current movie wasnâ€™t that big a trip,) and demographics (Collinsville is in a rural area and only had slightly over 1,100 residents) fairly much doomed this venture. The city of Collinsville itself is slowly wasting away, so it is likely that the Cricket will never again open in any capacity.

The first Cricket Theater may have had a Reproduco, which was a self-playing piano/organ combination instrument used for silent films, especially in the 1920’s.

why the name ‘cricket theater’? could someone explain please…

Boxoffice of May 22, 1948, ran this item datelined Collinsville: “Millard G. Weaver, owner of the Cricket and the Sandy theatres here, has announced his candidacy for mayor. Weaver opened his first theatre in Collinsville in 1924 and three years ago replaced it with a modern house.”

The Cricket actually operated intermittently well into the 1970s. Boxoffice of January 29, 1968, listed the Cricket as one of several dark theatres in the region that had been reopened the previous year. But the very next issue of Boxoffice, February 5, said: “Gay Johnson, it has been reported, has closed his Cricket Theatre in Collinsville, Ala.”

The Cricket shows up again in Boxoffice of December 8, 1975, which reported that Jim Tripp, operator fo the DeKalb Theatre at Fort Payne, had reopened the Collinsville house. Tripp operated the Cricket at least until spring of 1977, when the April 4 issue of Boxoffice mentioned it again. I haven’t found it mentioned any later than that.