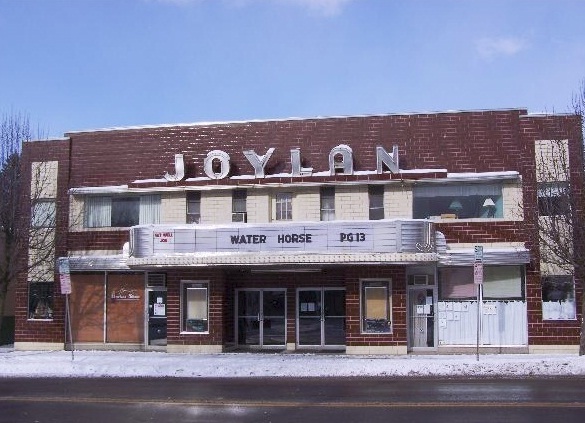 The Joylan Theatre with its seating capacity of nearly 700 is both spacious and impressive. Ted and Debby have owned the Joylan Theatre since 1995 and treat it like a member of the family. It’s always immaculate and tidy.

The Joylan Theatre is open six days per week and pretty much a family run operation. Its newer projectors, DDS, and new air conditioning system make the Joylan Theatre a great place to see a movie.

The Joylan Theatre opened on October 4, 1949 with Mario Lanza in “That Midnight Kiss”. It successfully combined two architectural disciplines. The Art Deco style exterior and Art Moderne style interior compliment each other quite nicely. The Joylan’s auditorium is simple but impressive. The three arches which span the auditorium with their indirect neon lighting are both unique and spectacular. The streamlined ticket wicket and blonde wood trim and panelling typify the period of the theatre.

In March 2021 it was reopened by new owners Russ & Rebecca Pustulka.

Cinema Tour gives the opening year as 1947 and no interior photo.

Today, March 3, 2007, I revisited the Joylan and saw a first run film. “Wild Hogs”. There were about 250 people at the 4:00 p.m. showing. Pretty good turn out for a small town single screen theatre.
The owner and I talked and she revealed something that many of us already know; which is, how difficult it is for a single screen, low admission price ($5.50) to get first run releases. Anyway, they managed to get “Wild Hogs” in its first week of release and it looks like they’ll do quite well with it.

This theatre is just as nice as it looks in the photo! The citizens of Springville NY are very fortunate to have it. The special polished ceramic exterior tiles are very special and not seen very often.

“Water Horse – Legend of the Deep” was released in the United States on December 25, 2007.

Sorry… a little late to the game on this. Cinema Tour says 1947 as the opening year… that is wrong. My great-grandfather Peter was the original owner of the Joylan, he built it and ran it until he passed… it opened in 1949. In 1947 he purchased the other Joylan in Springville, as the other one was built. After he passed, my great aunt took it over with her husband, Al. My grandfather was the one that was to take it over, but he passed it to her as she and her husband worked there more than him and understood the business better. As Al got too old, as he was running the projector 6 nights a week, with my grandfather running it the 7th, they sold it out of the family.

On Octopber 4, 2009 the Joylan Theatre will be celebrating it’s 60th anniversary. We will be holding a reception at 1:00 pm and showing the movie that the theatre opened with in 1949 at 2:00 pm. The movie “That Midnight Kiss” stars Kathryn Grayson and Mario Lanza. Admission will be the same price as in 1949. All are welcome so please come out and help us celebrate 60 great years of movie magic!

Hi, I am looking for contact information for the Joylan Theatre, but all I can find is the number for an automated message telling me what movies are playing. I cannot find a single number to contact the theatre and talk to a human being.

I am a local filmmaker and I would like to speak to the owner(s). If anyone knows how to get in touch with them, please let me know. Thanks.

In an article in the Buffalo News on October 15,2019 it stated that the theater was under the ownership of the Watermark Wesleyan Church but would continue to show movies while housing the church.