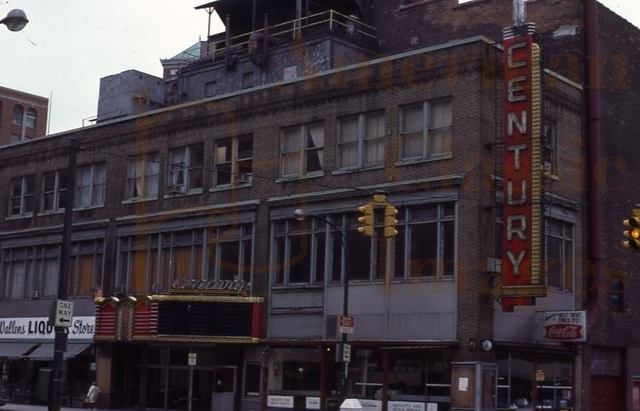 Operated down the street from Loew’s Teck Theatre, Broadway Theatre and Shea’s Theatre, this opened as Loew’s State Theatre in October 1921. It had a chandelier in its day. It closed as a movie theatre in 1970, and was then used by Harvey & Corky Productions for rock concerts. Recall the balcony would pulsate up and down if audience stamped their feet (waiting for encore, etc.) During the same time would show movies on Saturday nights, targeting the same rock concert audiences. Demolished and Burger King restaurant now occupies the site.

Right JIMY8, I also remember seeing a lot of these roadshow presentations here. However, I think my fondest memory is of repeatedly viewing (like for all day practically) the amazing stop-motion animation work of Ray Harryhausen in “The Seventh Voyage of Sinbad” at the Century. I still have the original soundtrack recording of this film, as well as the one from “The Ten Commandments”. The snack bar truly made their money on me that day!

As I recall, the Burger King was already on he corner when the demo took place and was damaged when the building collapsed during the process. I also recall that the organ pipes were still in place when it came down. I have a great photo somewhere of the front of the building where someone’s graffiti says “Save Me.”

I remember seeing This is Cinerama in 1952 or ‘53. It was
an impressive cinema and the film bowled over this 9-year-old
schoolboy. We saw the film on a Saturday matinee and
afterwards, we drove to a residential area where a house
had been converted to a dining room. It was called the
Marigold Restaurant. I thought it odd that a dining room
would be located in a house and on a residential side
street.

It was an enjoyable day despite the long drive from Toronto
and the maximum highway speed of 50 mph.

Yo Torontonian – when you made the long trek down the QEW in 1953, the only theater in Buffalo running Cinerama was Shea’s Teck – the Century installed the single projector version of the process after the Teck quit. Never heard of the Marigold Restaurant, but having a dining facility in an old house was somewhat popular at the time in the city, especially for bar and pizza fare.

Here is another photo:
http://tinyurl.com/ydy95n3

In the late 1970s, I remember attending a concert there. The Tubes performed but I can’t remember the opening act. Very theatrical including the lead singer exposing himself, which was a bit disturbing to a 16 year old.
Also saw a double feature Woodstock/Song Remains the Same. I think the movie started at 8 and got done around 3 am.
For both events, the pot smoke was so thick that it stayed on your clothes for days. It always struck me as nonsensical that Buffalo was spending all sorts of money to build a subway for a “Theater District” but it ended up tearing down one of the few theaters there.
But hey, that’s Buffalo! Now 35 years later, they want to bury the subway because dumb idea did not work.

Saw 2001 first run here in 1968. My cousin, who was a science fiction fan had a hard time explaining it.

Michael Shea would take over operation of the Century Theatre in Buffalo on December 22, according to the December 14, 1928, issue of the Corning Evening Leader.

According to this article, “King Of Jazz” made its Buffalo premiere on July 24, 1930.