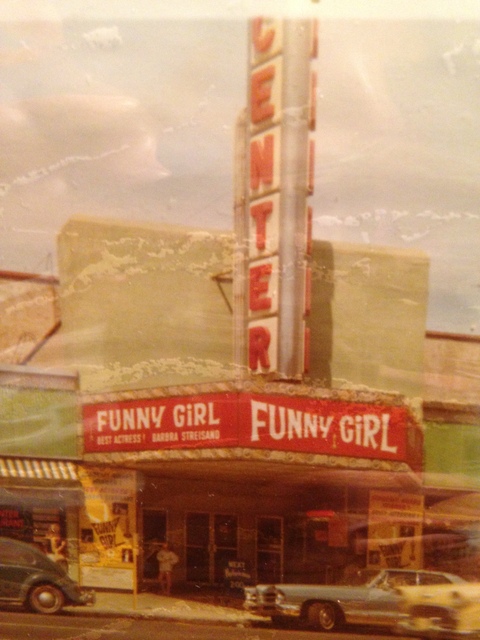 The Center Theatre was closed in July 1977.

Summer 1969 Funny Girl was playing at the Center.I have pics but am unable to upload

In case we missed something —

This theater opened as the Colonial Theatre in 1914, two blocks from the boardwalk. Located at 1517 Atlantic Avenue near Mississippi Avenue, it seated 1,391. Renamed the Center Theatre in 1954. Yes, the theater was capable of screening 70mm as it was equipped with 35mm/70mm Philips/Norelco projectors and Ashcraft Super Cinex carbon arc lamps. “Greased Lightning” starring Richard Pryor (Warner Bros.—July, 1977) was the last motion picture to be seen at the Center Theatre. The lettering was still on the marquee when the theatre was demolished. The site is now a part of Renaissance Plaza, a shopping center built in 1996. A KFC/Taco Bell now stands where the Center Theatre once stood.

The August 9, 1913, issue of Motography had this item about the opening of a house called the Colonial Theatre, but it gives a different location for it:

“Crowds flocked to the handsome new Colonial theater at Atlantic avenue, between New York and Kentucky avenues, Atlantic City, the afternoon of July 2, to attend the opening performance. Words of praise were heard on all sides for the up-to-date manner in which the new house is to be conducted and for its general appearance. Six capital pictures are shown each afternoon and evening. Chris S. Hand is the able general manager of the house and he has a competent staff of assistants.”

I don’t know if the magazine just got the location wrong, or if there actually was another, short-lived Colonial Theatre a few blocks from this one.

Does anyone know/recall if “Camelot” had its Atlantic City roadshow run at this venue?

I think Camelot played the Shore, but I am not 100% sure

you can find the microfilm from the Atlantic City Press from 1961 here - https://www.nj.gov/state/archives/pdf/newspaperSale.pdf