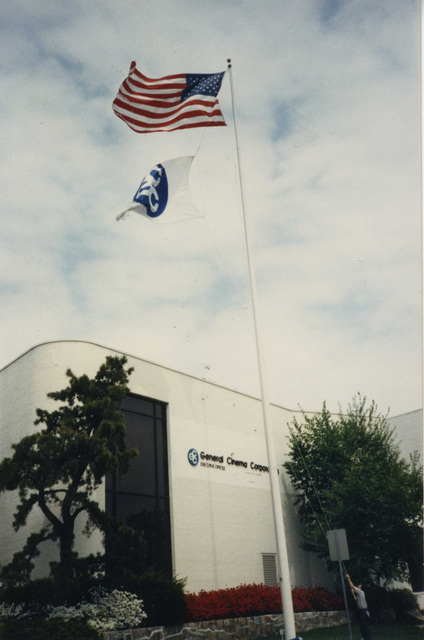 Originally a two-screen theatre, this was General Cinemas flagship house. I believe the building was converted from a Filenes Department Store before they moved down the street to the mall. The Chestnut Hill Cinema had more plush decor than most of their theatres at the time, because GCC’s corporate offices were in the next-door section of the building.

@Ron – it’ll be a new concept “Showcase Super Lux” – which I think might be all dinning, reserved seating, etc like iPic (Gold Class) – so the 6-screens makes sense for a high end luxury theater. I wish National had further developed The Bridge brand, although it probably didn’t make sense outside of urban areas – the Philly location was pretty awesome and ahead of its time.

Now that the N.A. Super Lux is open at the other end of the parking lot, what has become of this former General Cinema? Has it been demolished, or stripped out and occupied by some retail operation? Any current photos?

Back in the day, when this theatre was nearing completion, we were having a managers meeting in the Cleveland division and it was pointed out that GCC Prexy Mr. Smith (as Variety referred to him once or twice), was heavily involved in the build-out of this theatre. In addition to the layout, he picked out the finishes, resulting in the decor appearing a little more up-market than ordinary General Cinemas. Someone in authority told us, with a bit of sarcasm, that Mr. Smith has picked gold-plated flush handles for the toilets and urinals.

It’s still vacant being used as a construction office essentially, there was a temp art exhibit in it over the summer http://tmagazine.blogs.nytimes.com/2014/09/17/deborah-kass-craig-martin-outdoor-art-mall-chestnut-hill-florida/?_r=0

Regarding the ad that Rivest was kind enough to provide, I noticed that they managed to get the showtimes wrong from day one. Lucky Lady was a 2 hour movie and the evening showtimes are listed as 7:30 and 9:15. Probably meant 9:45. I am sure all of us who were managers, projectionists or both have plenty of horror stories related to mistakes like this.

As for this location, the GCC address that we mailed all of our paperwork to was 22 Flutie Pass which referred to Doug Flutie’s game wining heave against Miami. Could the GCC offices mentioned in the overview be at this location with a different address? I see on the map that this is very close to Boston College so that would seem to make sense.

22 Flutie Pass is in Framingham, not Chestnut Hill or Newton. It is currently the address of an AMC theatre.

StanMalone: this was the home office from when it opened until when they merged with Harcourt Brace Jovanovich and became Harcourt General. Once that happened the theatre division moved to an office building across the street, the address was 12-something (4 digits) Boylston. The Flutie Pass theatre came along in the final chapter of the GCC story. Maybe certain departments were relocated over there, but the HQ remained opposite the C.H. Cinema til the end.

The theatre division building was moved across the street to 1280 Boylston St. The Flutie Pass address was the new location for the Framingham GCC when Shoppers World closed. The new location bordered Natick, which was Doug Flutie’s hometown. Doug was honored and made a speech at the grand reopening. There were a couple of Film buyer offices in the back of that new Framingham theatre, which is now an AMC. Stan may be wrong about an error in showtimes, as they may have had a second print used the 2nd auditorium for an additional show, at a better time. (the other feature only being shown one time, that is.) That was a frequent occurrence at Chestnut Hill, thus the way we got such great grosses with the small seating capacity.

Ron, Dave, and David: Thank you for your replies. I always try to acknowledge when someone addresses a question or comment of mine. I did not do so here because I just became aware of them. For some reason I did not become automatically subscribed to this location when I posted my comment as used to be the case. I just happened to find out about this omission when I became aware of it on another page and did some back checking.

David, your explanation is certainly possible. For many years I worked as a projectionist for GCC in Atlanta. On a couple of occasions in those pre platter days, or at least working a booth built during the pre platter days, we did what you described. We would drop the last night show of a dud or kids show and would break the movie we were adding a show for onto the 2000 foot reels. (We never had a second print.) We would then start the last scheduled show at its regular time and then another one 30 minutes later, “biking” the print from house to house. It was extra work breaking down and rebuilding the prints every day, but in those days I was young and enjoyed doing anything to bring some variety to the job.

Thanks again to all of you for your information about that address. I was always intrigued by it and it is nice to know the whole story. Now if we can just get CT to fix the auto subscribe.