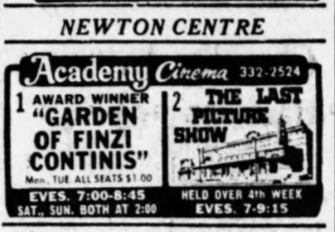 This theater was located on Beacon Street in Newton Centre, MA. It closed in the late-1980’s and had been in the Sonny and Eddy’s chain of theaters.

Architecturally, it was non-descript, probably built (or at least turned into a cinema) in the mid 1960’s. There were 2 screens, and each auditorium was quite spacious.

The theater tended to show more “art” type films than mainstream. In the early 1980’s, for example, “My Dinner with Andre” enjoyed a long run there. Locals were extremely upset at its demise.

The space currently houses a Pier One Imports.

By the way, if you or anyone else know something about the Newton Paramount, please add it to this site as well.

No idea why it closed. I was away at college and came back and it was no longer in existence. My hunch is that the lease became too expensive? I will add a posting for the Paramount soon.

The Academy was an attractive twin cinema in a great location. I recall seeing Fellini’s “Amarcord” there. I don’t know for sure why the Academy closed, but I wouldn’t be surprised if competition from the nearby West Newton complex had something to do with it. Also, Stanley Kaplan’s was not always in the basement of that building. A gym (called, appropriately enough, the Academy) was located there from the late 1960s through at least the mid-1970s.

Regarding the Newton Paramount—-I would also be interested in learning more about it. I recall going there once, for a screening of “Westworld” in the early 1970s. The Paramount was a twin at that time and I assume it closed by the mid-1970s. The parent company of Variety and other trade publications is located on the site of the Paramount.

Funny, my childhood memory of the Newton Center theater was that it was only in the downstairs location (where the Kaplan center is now). Either I’m misremembering or by the time I would’ve been going there perhaps it had already been downsized?

That would’ve been in the early 80s.

As a kid growing up in Newton Centre, I remember this theatre very well. I distinctly remember when it was being built. I sneaked in once (on a weekend?) when the workmen weren’t there, and got stuck in the elevator! Someone finally got me out (but by then the theatre construction was finished! Just kidding), and I thought I’d get in such trouble with my parents, but I never did. I also recall the smell of the new theatres (probably glue or something) and the very first films they showed… well at least one of them (‘cause they had two theatres) was Zefferelli’s “Romeo and Juliet”. Possibly the other screen was showing “Chisum”? Not sure, but I do remember seeing that there as well. I was at college out of state in the late 70’s, and when I came back it was a Pier One! FIY, it was located on the ground floor, not the basement, where as one person said was indeed where the “Academy” gym was.

Newton Centre is a high rent district. It was impossible for the Sonny & Eddy’s theatre to survive the large rent increases which were typical in the area.

Most of the independant businesses in Newton Centre which were in existance at that time are gone.

Most new independant businesses last under one lease cycle.

Many stores have been converted to realty offices.

I remember the Newton Paramount as being on Washington Street in Newton Corner. A few miles east of the West Newton Cinema.

I think other Sonny and Eddys theatres like the Allston closed on a similar timeframe to the Academy.

I think the Academy Twin opened around 1969 or 1970. I remember Monday and Tuesday nights were 1 dollar nights. Early films they had were BUTCH CASSIDY, and THE STERILE CUKOO – I recall these 2 especially since they were rated M and we hoped they would let us in as we were 12. Sometimes we passed, sometimes not. Later, THE SEDUCTION OF MIMI was a huge hit there. Funny to think a foreign film opened in Newton Center and not downtown or Harvard Square. Maybe it played there too but I didn’t recall hearing about it before it came to the Academy and I was really into foreign films by that time. The lobby had great mod movie posters of old stars, like Jean Harlow and Charlie Chaplin – all swirly pinks and oranges.

I never saw The Seduction of Mimi, but I vaguely recall it and other Lina Wertmuller films playing at the Exeter Street Theatre in Boston, which was also part of the Sonny & Eddy’s chain.

SEVEN BEAUTIES opened at the Exeter for sure, I was there opening night. SWEPT AWAY may have played there too, can’t remember. Believe it or not (well Ron, I bet you may share this obsession) I have every movie ticket stub since about 1968 when I got old enough to start my own little collection of things, and later, when I have nothing to do (besides perusing this site) I might just dump them on the floor and start sorting them by city, so I can remember where things played! Before they printed the name of the film on the tickets I used to write the titles on, very small on some of those tiny old stubs! Difficult when they were long titles and double bills!

The description needs to be updated, as the Pier 1 Imports store has since closed. The space is now housing a Citi Bank branch, a Kaplan Test Center, and a salon, Mini-Luxe.