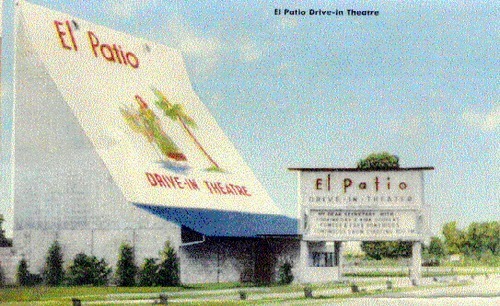 The Cairo Drive-In had a ‘soft’ opening on June 17, 1949 and officially opened on July 9, 1949. During the early-1950’s it was known as the El Patio Drive-In, the huge screen tower was designed with a Spanish theme as the name might indicate. This good-sized theater originally offered pony rides for children and also had a snack bar and modern-looking marquee. It was located off Route 51, for which it was later renamed by 1955.

The 51 Drive-In closed long ago and has since been torn down. Almost nothing remains on the site today to indicate an outdoor theater ever stood there.

I think the screen tower still stood in the 80’s. I remember driving through Cairo around ‘84-'85 on the way to St. Louis. We passed a ruined drive in with seriously overgrown and crumbling screen tower. This is the only Cairo drive-in listed and so must be it. I’m even pretty sure the 51 name was on it.

Approximate location for this drive-in was north of town on Old US 51 (now Hwy 37) NE of Patierdale Rd. Look for the large lot.

Sullivan also reported plans to build a second screen to serve a segregated section for blacks.