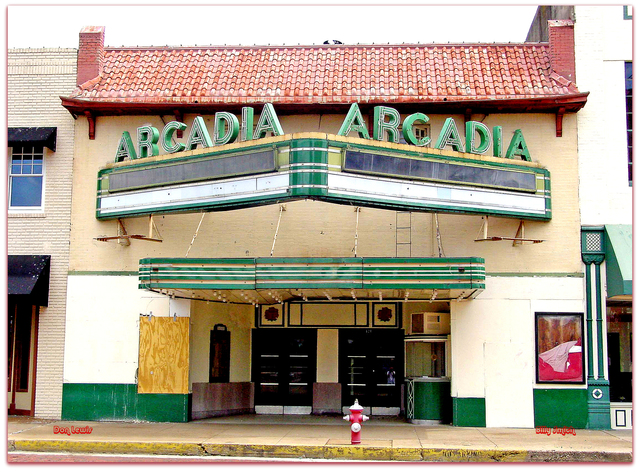 The Arcadia Theatre was just one of the many theatres that lined the streets of Tyler at one time. A very attractive two story building with a sloped red shale shingled roof leading into a dark tan stucco down to the first level seperated by a dark green tile line then changed into a cream color stucco. There was a black tile along the botton of the building and around the entrace.

A very narrow triangular marquee with just a single panel for attractions and then large green neon lettering above spelling out “Arcadia”. The box office was located to the right of the front entrance doors. The theatre had a small lobby and small balcony.

In 2005, a coffee house was opened in the former theatre’s lobby area.

My pre-coffee house pix of the ARCADIA sign:
View link

and the box office:
View link

Construction has begun on the auditorium as it will now be used for concerts and church services.Coffee shop is open and old balcony is now seperate from the auditorium and renovated.

status should be .
opened/

My photograph of the ARCADIA View link

I spent my youth in the mid 1950s at the three theatres in downtown Tyler. I couldn’t wait for Saturdays. I got one dollar and walked to downtown Tyler, which was still had a lively downtown. I usually went to the Tyler Theatre first and then on to the Arcadia and Liberty. The Tyler showed most of the first runs and the bigger hits but the Liberty and Arcadia both occasionally ran some of the bigger films. I saw “Around the World in Eighty Days' at the Arcadia. They had installed a temporary big screen in the auditorium for the film. I also saw the cropped version re-release of "The Wizard of Oz” which was sold as “See it in widescreen for the first time”. The rest of the time they had the typical double bill fare of B films – mostly westerns and adventures.

For some reason one of the films I saw there that has always stuck in my mind is “The Saga of the Viking Women and Their Voyage to the Waters of the Great Sea Serpent”. It was advertised not only as a great adventure but also as the film with the longest title ever.

The bathrooms were upstairs and the windows actually opened. I loved to poke my head out of the window. The marquee blocked some of the view but I could still see the town square through the letters.

I’m glad the building has been saved, if not restored as a functioning theatre. It saddens me to see almost all of the lesser theatres gone now, but I understand the economics behind their demise. At least the Shannons have given The Arcadia a second life and a second chance. I think it’s terrific that they are doing this.

I hope one day to take a return trip to Tyler and see the Arcadia again. I guess the green sofa I used to sit on eating my 5 cent pickle while waiting for the movie to start will no longer be in the lobby but it will still be a thrill to see it.

There is a wonderful picture of the Arcadia and the entire block taken in 1929 at Texasscapes.com. Here is the link:

I believe I have a photo of the Arcadia Theater taken circ 1943 when Roy Rogers and Trigger made a personal appearance. My photo shows Roy rearing Trigger up on his hind legs in front of the theater. Your description of the very narrow marquee and the green letter spelling out “Arcadia” on the sign above matches what I see in the photo. The building shown on the left was “ Ira Prewitt’s Hardware Store.” The box office can barely seen to the right of the entrance just over the heads of the kids gathered outside. My guess is that this was in 1943 when Roy became King of the Cowboys at Republic. His billing with Trigger and the Sons of the Pioneers can be seen on the sign over the front entrance. The looks of the kids' faces at seeing their hero in person on a rearing Trigger shows why Roy was so popular. I don’t have the hardware for posting this photo on line but if any of you former Front Row Kids of Tyler, Texas are still around, you may recall this very special day. I would guess that the photo was taken by either Roy’s publicity agent or a local photographer. My father was a local newspaper reporter for many years. In 1956, he took me to the Ohio State Fair where we met Roy and I had my photographer with him. Dad also took some photos of the crowd and of Roy and Dale. A publicity agent with Al Rankin Agency tried to get some free photos from Dad by promising him payment and then when the photos were sent, he tried to claim that the photos were not suitable. Dad contacted Art Rush, Roy’s personal manager, and Rush fired the guy. He also sent Dad and I color photos of Roy, Dale and Trigger autograped. I also still have the black and white photos that Dad took at the fair.