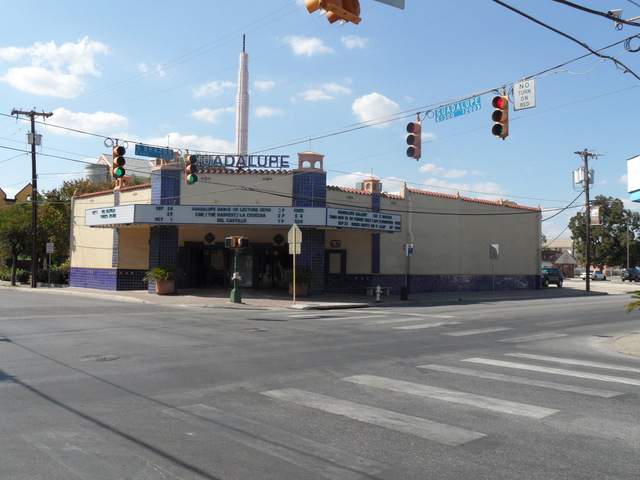 The Guadalupe Cultural Arts Center presents a seaon of events and develops the arts and culture of the Chicano and Latino people. A single story building but a good job was done on the color scheme when it was restored.

When it opened July 3, 1942 as the Teatro Guadalupe, it screened the US premiere of the Mexican film “Aguila roja” starring Victor Manuel Mendoza, a short subject “Un Corto del Genial” featuring Cantinflas and a Mexican cartoon. It had 862 seats. It succumbed to the economics of the 1960’s like many other stand alone theatres. In early-1972 it reopened as the Aztlan Theatre screening American feature films. It was closed in 1973. It later became a flea market.

With the assistance of the mayor of San Antonio and council members loans were obtained for over a million dollars for renovation. The renovation started in 1983. It had its grand reopening in 1984 and is going strong today serving the community.

from the Cameo Theatre Corporation: We bought our “west side sister” in 1980 to prevent it from being demolished. It was in pretty bad repair, but the city was interested in seeing the area revitalized and so we put it in a private developer’s hands to redevelop for the city. After a period (maybe 10 years?)the city got title to the property and it has been a very vital part of the Avenida Guadalupe Project.

The Guadalupe reopened in early 1972 as the Aztlan Theatre. The then owner of the Empire cleaned it up nicely and tried running American double features there. It did not do well. I saw “WUSA” starring Paul Newman and Joanne Woodward at the Aztlan. My best memory of the theatre was the ornate floor in the lobby, and a beautiful light blue traveler curtain that flowed gracefully when opened or closed. The projection room was outfitted with some ANCIENT Simplex Standard projectors. Even so, the picture quality was quite good. The only way up to the projection room was by a ladder fastened to the wall. It made getting the film up to it quite a chore! By 1973 the theatre was closed, and became the Guadalupe again.

Here is a 1948 ad from the San Antonio Light:
http://tinyurl.com/ypkfkd