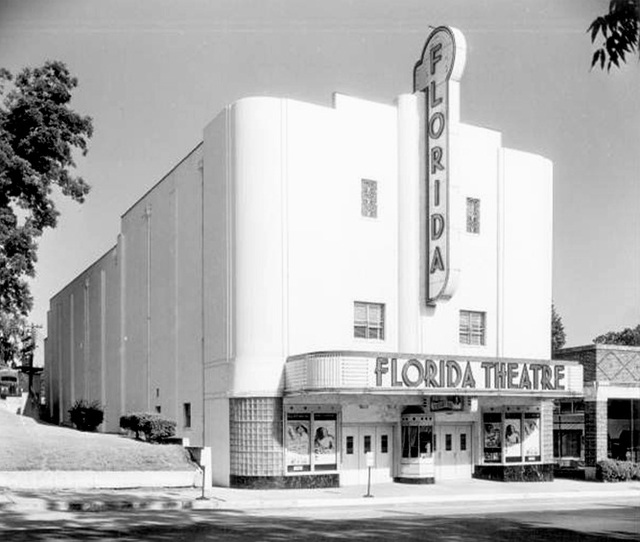 This Streamline Moderne style movie house opened November 20, 1940 with Tyrone Power in “The Mark of Zorro”. It featured a sleek facade with a large vertical sign, a marquee with the theatre’s name in bold stylized lettering, and glass brick decoration. This stunning theatre sat on N. Monroe Street between E. Park Avenue and E. Call Street. By 1957 it was operated by the Talgar Theatre Company.

In 1960, the Florida Theatre was heavily damaged in a fire. The theatre was rebuilt to the plans of architect Theodore C. Poulos, albeit much more simple in style than the Moderne style original look. The large vertical sign was retained, however. By 1968 it was operated by Kent Theatres Inc.

The Florida Theatre operated into the 1980’s and by December 1987 was operating as The Movie Pub. Later, the building was converted into office space.

I saw and took one slide photo of the Florida in 1981. It was closed at the time, and indeed on the marquee where in the 1940s and 60s photos it says “Theatre” in neon, it said “Circus,” which at the time baffled me.

The exterior of the theatre was pale yellow, with some other colored accents on the vertical and marquee, like red and green.

The last feature to play the Florida before the 1960 fire was, appropriately, THE LAST VOYAGE.

TALLAHASSEE-The first-run, downtown Florida Theater, valued at $500,000, was completely gutted by a fire after closing the night of Friday, March 25. The cause of the blaze was not determined.

The Florida had been the favorite entertainment center for generations of lawmakers, their families and students and facult members of Florida State University in the state’s capital city. Managed for many years by Tommy Hyde, who indicated that rebuilding plans may soon be set in motion, the Florida was the flagship of Kent Theaters, owned by Fred Kent of Jacksonville.

Here is a picture of the former Florida Theatre that I took in October 2010.

thanks for the pictures,guys.July 20,1950 has A Double Feature,“TAKE CARE OF MY LITTLE GIRL” and “SEALED CARGO”.During those years Double Features were showned almost every day.

I’ve been unable to identify the original architect of the Florida Theatre, but the architect for the rebuilding after the 1960 fire was Theodore C. Poulos. It is listed among his works in his biographical entry in the 1962 AIA Architects Directory.

This opened on November 20th, 1940. Grand opening ad in the photo section and

The newspaper page rivest266 linked to features a courtesy ad placed by architect Roy A. Benjamin, which indicates that he designed this house for E. J. Sparks.

Was showing Made in Heaven, December 9th, 1987 and calling itself The Movie Pub. That’s the last listing I can find.