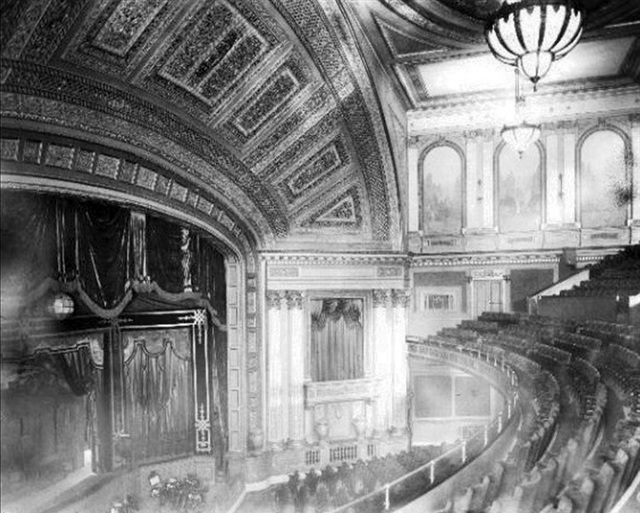 The Rialto was considered the finest and most costly (at one million dollars) theatre in Louisville. It opened in 1921 and was closed in 1968 and demolished in 1969.

It had chandeliers of Bohemian crystal, a great marble staircase, walls of Rockwood tiles. It was Louisville’s first grand movie palace, but is now the site of a parking lot.

I was assistant manager of Louisvilleâ€™s Rialto Theatre from January 1968 until it closed on July 31, 1968. I was the last person to leave the theatre the night it closed. It was a sad day for Louisville and me.

The Rialtoâ€™s architecture style was French Renaissance. It was very similar to the Palace Theatre in Columbus, Ohio. The Rialto was Louisvilleâ€™s first Cinerama theatre, converted in the early 1960â€™s. It continued to play roadshow engagements until its demise.

I met Robert Wise about five years ago when he was giving a lecture at DreamWorks, where I work. I told him I was from Louisville (Mr. Wise perked up because was from Indiana) and that The Sound of Music had played at the Rialto, Louisville’s grandest movie palace, for an entire year, reserved seat. His face lit up and he seemed genuinely surprised and immensely pleased.

A colorful post card rendetion of fourth avenue, the RIALTO and a LOEWS/UNITED ARTIST (now the Louisville Palace Theater).

A closer look at the Rialto marquee shows that “CAREFREE” with Ginger Rogers and Fred Astaire was playing.

Need info on a magician named “ASKA” who was represented by the manager of the Rialto in Louisville? It would be between WWII and 1964 since the address for the theater is Louisville 2, KY, ratehr than having a zip code. The suits worn by the magician appear to be vintage 1950s.

From 1942 a postcard image of the Rialto Theatre along with a view of the Loew’s State marquee on the right.

It was 50 years ago today that “The Sound of Music” premiered at the Rialto. With a reserved-seat run of 64 weeks, it’s almost certainly the long-run record holder for this venue. (Anyone know of something that ran longer?) It was one of more than 70 engagements in North America that ran the movie longer than one year.

Scotty Moore was Elvis' guitarist in his early years. His website has some incredible photos of the Rialto being built and it’s completion. Copy & paste to view.

New Showcase Presentations in Louisville article includes mention of the numerous roadshow, Cinerama and 70mm engagements here at the Rialto (along with other Louisville cinemas).

Coate is correct. The Sound of Music ran longer than any other movie at the Rialto. You can see ads for all of the movies to play the Rialto by going to my blog: http://scottsantoro.blogspot.com/ I started with 1968, when the theatre closed, and I just posted the ads for 1934. I intend to take it all the way back to 1921.