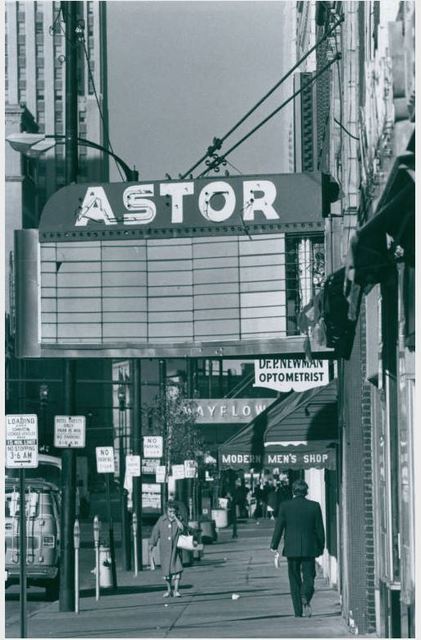 Opened as the Allen Theatre on September 8, 1920 with William Buckley in “Under Northern Lights”. It closed in 1959 and reopened in November 1961 when it was renamed the Astor Theatre and operated as an adult theatre.

Closed and demolished in 1982, the site is now an empty lot.

Does anyone have a memory of the sign falling off the Astor Theater bulding sometime in the late 1960’s? Finding a date for that would help me locate a picture in the Beacon Journal of interest to my family. Thanks.

On page 127 of the book Akron, by David W. Francis and Diane DeMali Francis, there’s a 1920s photo of the Allen Theatre, and it appears to fit the description of a house then ready for construction according to the following item from the June 10, 1920, issue of Engineering News-Record:

Partner G. Evans Mitchell withdrew from the firm later that year, and the successor firm Frank & Wagner were local associates of the New York firm George G. Post & Sons. They designed a theater that was to have been built at Ravenna, Ohio, in 1921, but I’ve been unable to discover if that project was carried out.

If the Allen was indeed the theater that was the subject of the 1920 Engineering News-Record item quoted in my previous comment, then it is likely that the Akron firm of Frank, Wagner & Mitchell acted only as supervising architects for the project. The NRHP nomination form for the Moreland Theatre in Cleveland lists the Allen/Astor Theatre in Akron as one of five theaters designed by the Moreland’s architects, Sigmund Braverman and Kurt Havermaet. The firm of Braverman & Havermaet had its offices in Cleveland.

Did it had the same owners as the Allen theatre in Cleveland, Toronto and Montreal?

September 8th, 1920 grand opening ad as Allen can be found in the photo section. It was owned by Allen T. Simmons and not by the Canadian chain, Allen Theatres.

Reopened as an adult cinema called Astor in November 1961.

According to the American Architect and Architecture Journal, 9/13/1922, Braverman and Havermaet had just announced they were going into partnership. Perhaps they were both working for Moreland and decided to become official partners in 22. Did find another tidbit. In the Industrial Arts Index, Vol. 10, 1921, the theatre is listed with the name I. T. Frary. Frary worked in interior design as well as doing other types of artwork. Not sure what his involvement was, but interesting. Thanks for all the information!

Circa 1942 and 1929 photos as Allen Theatre courtesy Vince Nicklin.