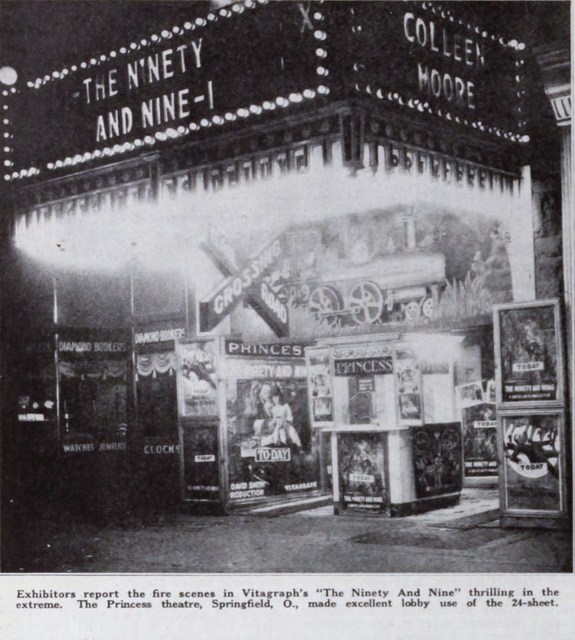 A 1917 photo on page 34 of Springfield, by Harry C. Laybourne (Google Books preview), shows that the Princess Theatre was on the south side of West Main Street a few doors east of Fisher Street, across the street from the Fairbanks Building.

Springfield, Ohio: A Summary of Two Centuries, by Tom Dunham, gives the address of the Princess Theatre as 17 West Main Street.

The building which became the Princess first appears on the 1891 map, with the note ‘Being Built’. It was a three-story brick building with a stone front. The 1894 map shows a store in this location.

The 1910 map shows the theater using a 15hp gas engine and 10kw dynamo to power the operation. Sometime between 1910 and 1928, it seems the theater was expanded into number 19 to the west. This had originally been an odd one-story structure with a narrower wooden front on a brick rear. On the 1928 map, it has been greatly expanded in the rear and the front reconstructed in brick. An intermittent partition wall is still shown, but the ‘Movies’ legend is written diagonally across both spaces.

The 1955 map shows the space as vacant. Most of the block was destroyed long ago, and aside from the State theater complex and a bit on the SW corner, is a wasteland of surface parking, with a few ugly modern structures scattered about.